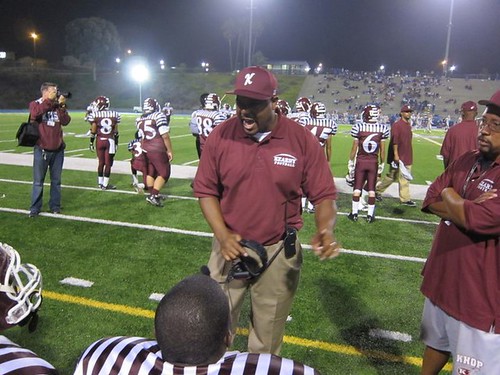 With the first days of the new school year here, Garfield High School is in the news — but it’s not for successfully deploying a small army of substitute teachers to make sure last year’s overcrowding issues didn’t mar the start of the school year. Instead, Garfield’s new high school football coach is being talked about on sports pages around the country:

Garfield coach cites safety issue after forfeiting football game
Garfield High School’s football season opener at Lake Washington of Kirkland on Friday ended in a forfeit after the Bulldogs’ first-year coach, Kelvin Goliday, was ejected and his team refused to return to the field.

Less than two minutes into the third quarter, after a Garfield fumble was recovered by Lake Washington with the Bulldogs trailing 14-0, Goliday called a timeout to talk to the officials.

“In my opinion the whistles were slow,” Goliday said. “I called a timeout early in the third quarter to talk to the ref about maybe getting quicker whistles so that no one gets hurt. This was both sides of the ball. At the time the fumble occurred, I felt the whistle should have blown long before that.”

Goliday was hired from a San Diego-area high school last spring to help bring “a new start” to Bulldog football.

He has been placed on administrative leave while the school district looks into the issue.

The Bulldogs take on Sammamish Friday night at Memorial Stadium. More information is at http://www.garfieldfootball.com/