The number of gay couples living in the Central District increased significantly since 2000, according to 2010 Census data. Some census blocks within the neighborhood even saw a doubling of the number of gay couples, and the block that includes Jackson Place and much of Judkins Park saw an increase to 53 couples from just 16 in 2000. 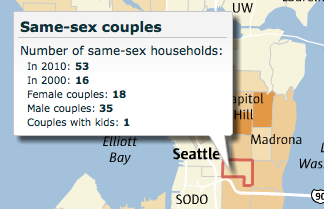 Graphic by Justin Mayo and A. Raymond/The Seattle Times. Used with permission

Capitol Hill is still the largest center of the gay population in the region, but that is changing. Nearly every area in the region increased the number of gay couples living there. The CD, which already had a higher-than-average gay couple population, saw a surge. The percentage of couples who are gay is now above 10 percent for most of the neighborhood.

The Seattle Times created an interactive map displaying the same-sex couple data for the city.

The increases seen across the city may not be entirely due to increases in population. The census first started collecting same-sex couple data in 2000, and the increase could also be due to more people feeling comfortable declaring their relationship on the census form, as the Seattle Times noted:

Many factors account for the growth in numbers of same-sex couples over the decade.

Since 2000, Canada and several U.S. states have legalized gay marriage, and Washington has a domestic-partnership law that grants same-sex couples many of the same state-level benefits as married people.

At the same time, couples have become more aware that they can indicate their status on the census forms, and many are likely more comfortable than they were 10 years ago in doing so.