A Vulcan will find love this summer at Lavizzo Park.

Actors will perform live theater based on classic episodes of Star Trek TV episodes. Last year’s productions were a hit even in the rain.

This year, the crew has chosen “This Side of Paradise” (Season1, Episode 24) in which Spock experiences love (what’s geekier, knowing that by heart or looking it up on Wikipedia?). 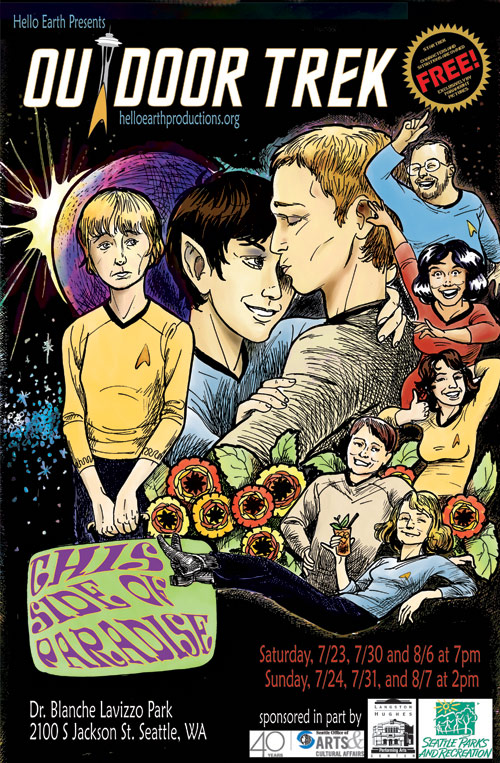 Hello Earth Productions is proud to announce its second annual “Outdoor Star Trek” performance series. Performances will be Saturdays at 7pm and Sundays at 2pm in Dr. Blanche Lavizzo Park’s amphitheater on the weekends of July 23-24, July 30-31, and August 6-7. The classic episode has the crew of the Enterprise landing on the distant colony, thought to be long deserted, only to find the colonists mysteriously alive and well. Joy DeLyria directs, and the show features Kris Hambrick as Captain James T. Kirk, Helen Parson as Mr. Spock, and live music arranged by Sean Robinson. The show is free and open to the public.

“This Side of Paradise” was written by D.C. Fontana and Nathan Butler, and was the twenty-fourth episode of the first season. It is highly regarded among fans, ranked as one of the top ten episodes of the series on Entertainment Weekly and IGN.com. When the crew of the Enterprise lands on Omicron Ceti Three, they expect to find no survivors. Instead, they find mysterious colonists, mind-altering space pollen, and the final threat to Vulcan logic: love. Thematically, the story explores the conflict between desire and duty and achieving personal pleasure versus social progress. The production aims to both appreciate the humor in the writing and respect the thought-provoking underlying messages. It interprets Star Trek not just as popular culture, but as a piece of art, with timeless concerns that take on timely nuances as American society moves into the future. In order to explore those nuances, the production employs everything from gender-blind casting to eclectic music choices, including but not limited to flute and banjo.

Check out more photos from the 2010 production.