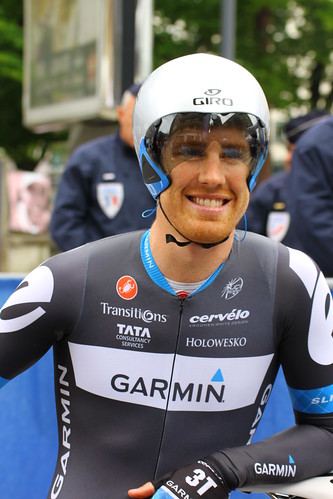 Born and raised in Wenatchee, Farrar resides in Madrona part of the year. He got his racing start in the Seattle area, turning heads at Seward Park criterium races. His early Seattle racing days were noted in a Wall Street Journal profile in 2009:

Most cyclists who raced in the Seattle area in the late 1990s remember Tyler Farrar as a teenage sprinting prodigy who used to beat grown men in the prime of their careers. Before he hit puberty he was heading to Seattle’s Seward Park and giving weekend-warrior racers a run for their money. A couple of years later, he’d become one of the dominant cyclists in the area. “I remember comments like, ‘Damn, we just got beat by a 14-year-old,’” says Terry Buchanan, who recruited Mr. Farrar to his Broadmark Capital team. Mr. Farrar raced on regional teams in Seattle, went pro at 18 and by 21 was considered one of the top sprinters in the U.S.

Riding for the Garmin-Cervelo team, Farrar made a “W” with his hands after crossing the finish line July 4, a symbol that he had dedicated the victory to his long-time friend and teammate Wouter Weylandt. Weylandt died earlier this year after crashing during the Giro d’Italia race. His death was the first in a major cycling race in 16 years.

It was unclear whether Farrar would even race in the Tour de France after taking weeks off from riding to mourn the loss of his friend, but he decided to come back to the sport and work extra hard to make up the lost training time to be ready for the tour. From the Associated Press:

“This has been a horrible last two months, with everything that happened in the Giro,” Farrar said. “I’ve had a lot of ups and downs. But in the end, I wanted to be able to come back, and do something special to pay tribute and this is certainly the biggest stage in the world to do that.”

Farrar’s win came at the end of a 123-mile stage from Olonne-sur-Mer to Redon, which he finished in four hours and forty minutes. To put that in perspective, Wenatchee is 139 miles from Madrona. So for someone like Tyler Farrar, his home in Madrona is merely a bike ride away from his hometown in Central Washington.