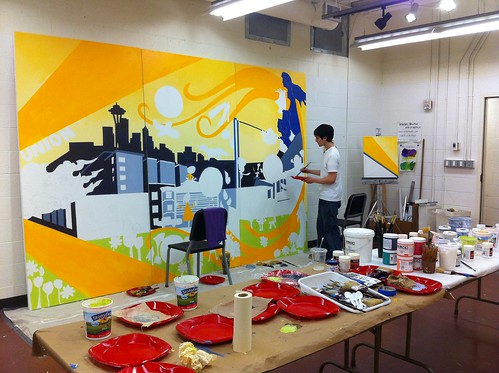 The product of a Seattle U class on community art, artists and community members will install the completed mural near Bailey Gatzert Elementary’s  playground today (June 20) from 3:30 to 5 p.m.

As we reported in our previous story, the students in Art 293: “Community Art & Mural Painting Techniques,” taught by Danila Rumold, have been working with the parents and children of Bailey Gatzert to create a mural that reflects their neighborhood and the diversity of the school’s community. The mural was created by students in a Seattle U art studio. Painted on wood, the work is being transported to the site.

From the Seattle U release:

On a recent tour sponsored by the SU Youth Initiative, Rumold visited Bailey Gatzert, where Principal Greg Imel told her he hoped to replace an existing mural at the school. “I thought art would be another nice element to bring to Bailey Gatzert and continue to build that relationship,” said Rumold.

The Youth Initiative unites SU and the wider community with the goal of helping youth in the Bailey Gatzert neighborhood to succeed in school and in life.

Brother Mark Elder, a visiting muralist from Chicago’s DePaul University, spoke to the students about the role of the artist as peacemaker in community art. He talked about creating public art with socio-political, community and religious themes and the dialogue it can produce.