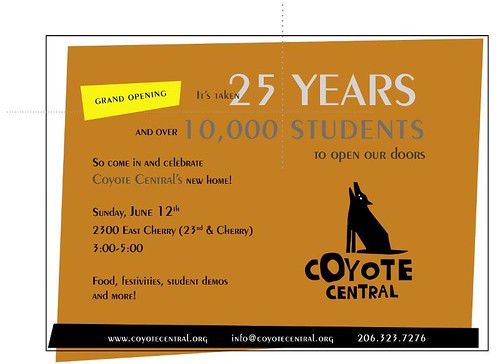 Coyote Central is finally ready to open the doors to its new location at 23rd and Cherry. The youth arts and education organization is holding its grand opening Sunday, June 12 from 3-5 p.m.

The building at 23rd and Cherry across the street from the Garfield Community Center stood vacant for several years after Dilettante Chocolates moved out in 2007. Coyote Central purchased the property in April 2010 and began renovation work in August.

In its 25 years in Seattle, Coyote Central has taught young people everything from cooking to dancing to furniture making. They had been previously operating out of a space near 27th and Madison, but the new digs will feature a teaching kitchen and an instructional space. Several classes, such as glass-blowing and welding will continue to take place in professional spaces around the city.

The organization has been responsible for many pieces of public art in the neighborhood, including the grand entrance to Flo Ware Park and many pieces around Garfield Community Center.