If you take a stroll through Yesler Terrace, the first thing you may notice are all the different languages you hear around you. Next, you may notice the walking paths that run in front of each home, snaking through the neighborhood and connecting the front porches and backyards of each row house in this unique housing project. Some yards are overgrown, while others have beautiful gardens. Others are filled with childrens’ toys. 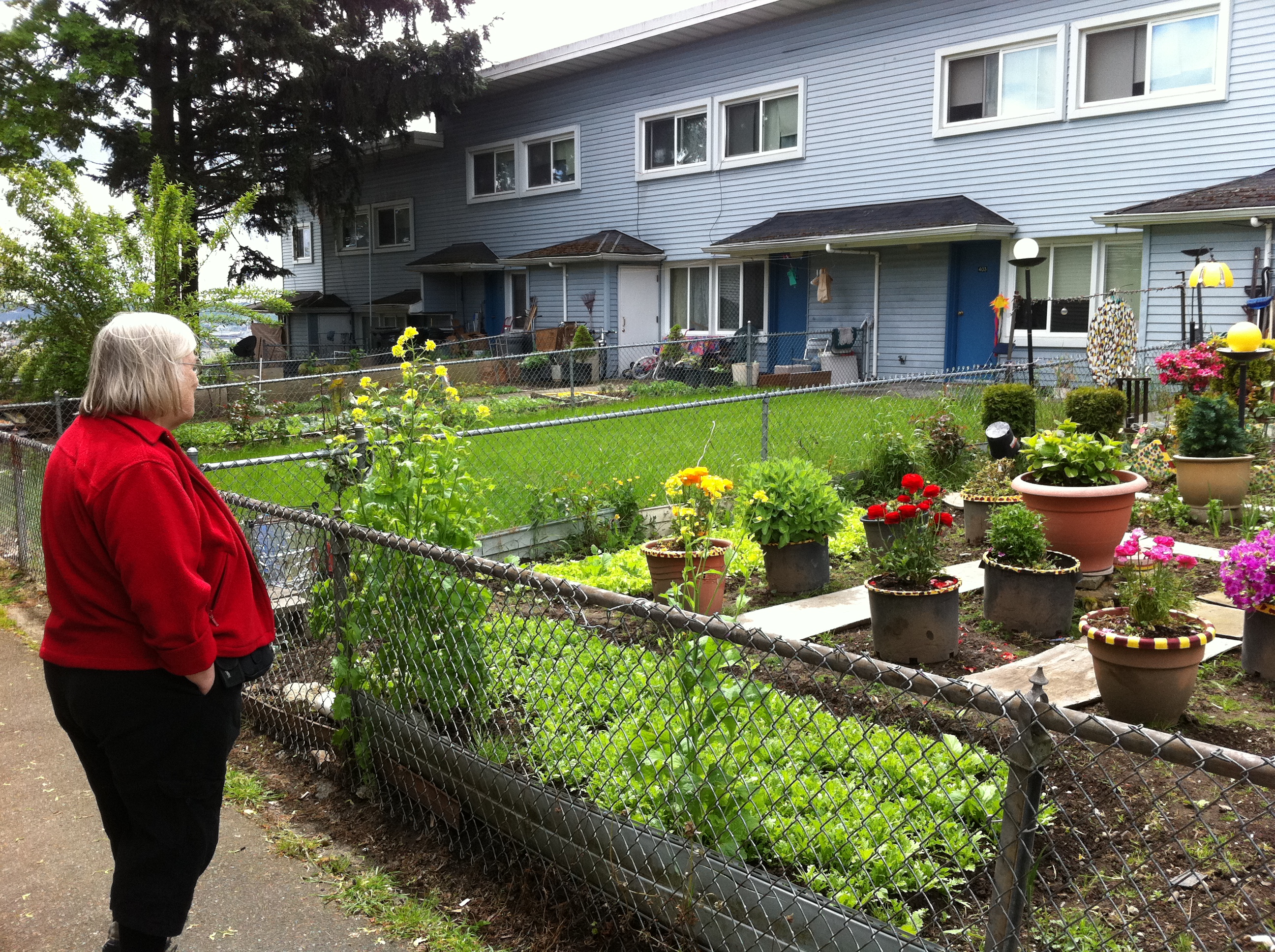 Though some of the buildings and playgrounds look a little dated and in need of love, Yesler Terrace is a neighborhood that can help individuals and families through hard times. The average stay in the neighborhood is only a few years.

“This is designed to be a good place for people to live,” said neighborhood advocate Kristen O’Donnell.

The waiting list to get into Yesler Terrace can be years long, especially for larger families. Once on site, though, the wait can be well worth it. Residents have access to services that are not always available when living in the private market with the aid of housing vouchers. There is also support for people who have limited English speaking abilities.

“Vouchers work better for people who have small families and speak English,” said O’Donnell. The monthly community council meetings in Yesler Terrace are conducted in five languages. If something is said in English, the speaker must give pauses every couple sentences so the interpreters can translate. If someone speaks in a language other than English, the question must be translated into English, then into the other four languages before a response can be given.

“It easily takes twice as long to go through the same amount of subject matter,” said O’Donnell, who is the facilitator of the leadership team of the council. “But it’s also very exciting.”

Under the Seattle Housing Authority’s plan for redevelopment, the number of low-income units available in Yesler Terrace should go up significantly. As the SHA sells land to private developers for the construction of high- and mid-rise residential, office and mixed use buildings, they will use that money to build mid-rise buildings to replace the current, aging housing stock in the neighborhood. Under the plan, the neighborhood would become a mixed-income neighborhood with more communal park space, neighborhood roads that connect to the street grid and a new retail core. The neighborhood could go from short buildings with individual lawns to a more urbanist vision with high density housing, a neighborhood retail core and strong transit access, including the First Hill Streetcar.

Some residents do not use their lawns, allowing them to become overgrown either out of lack of interest or because they are no longer able to take care of the space. But for others, the lawn space has become a business or a work of art. 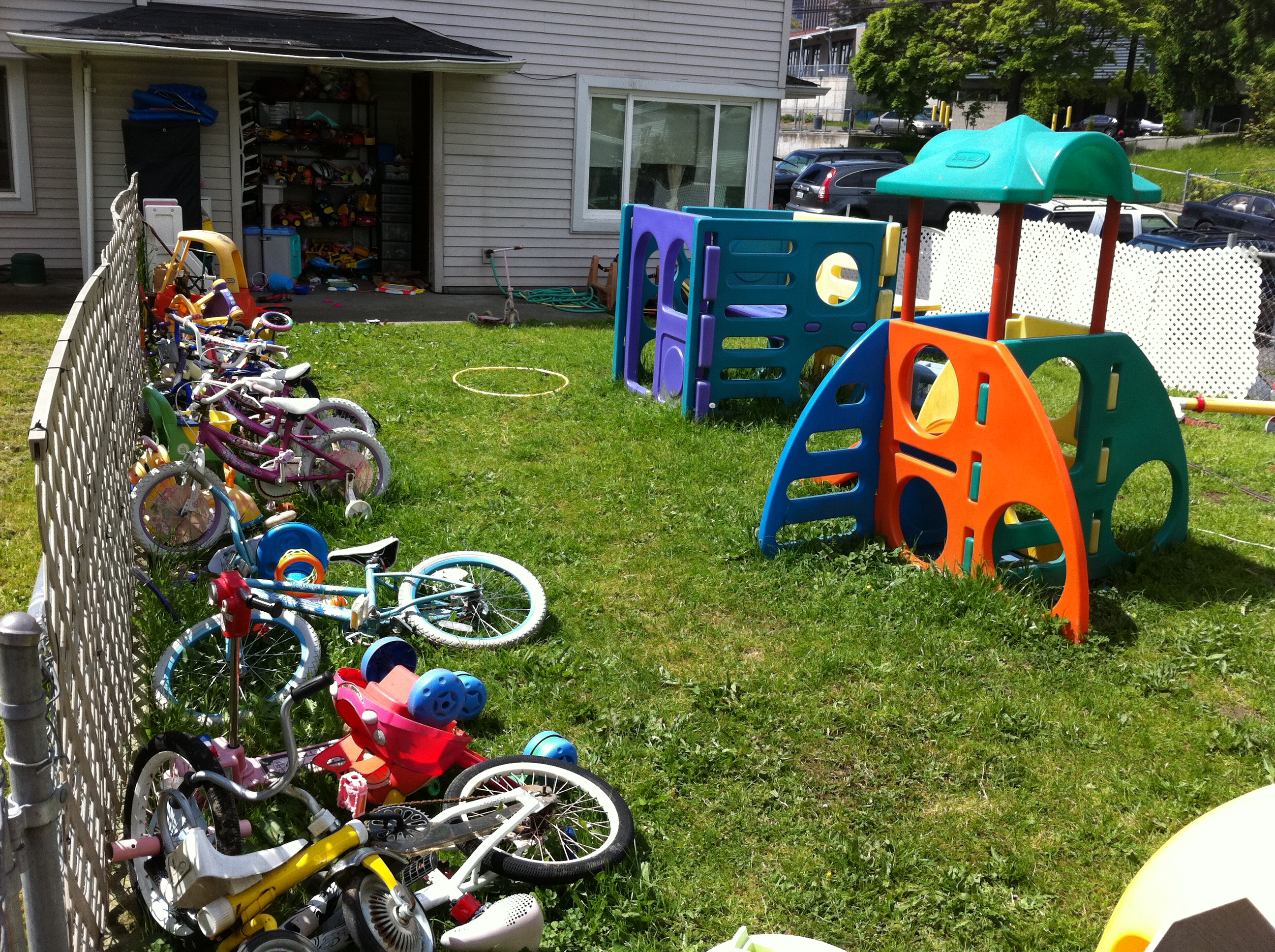 One household we passed operates a day care service out of their home. The yard space here is heavily used by children, and is an important part of that business. The service also fills a clear need, as Yesler Terrace’s population is 39 percent children. 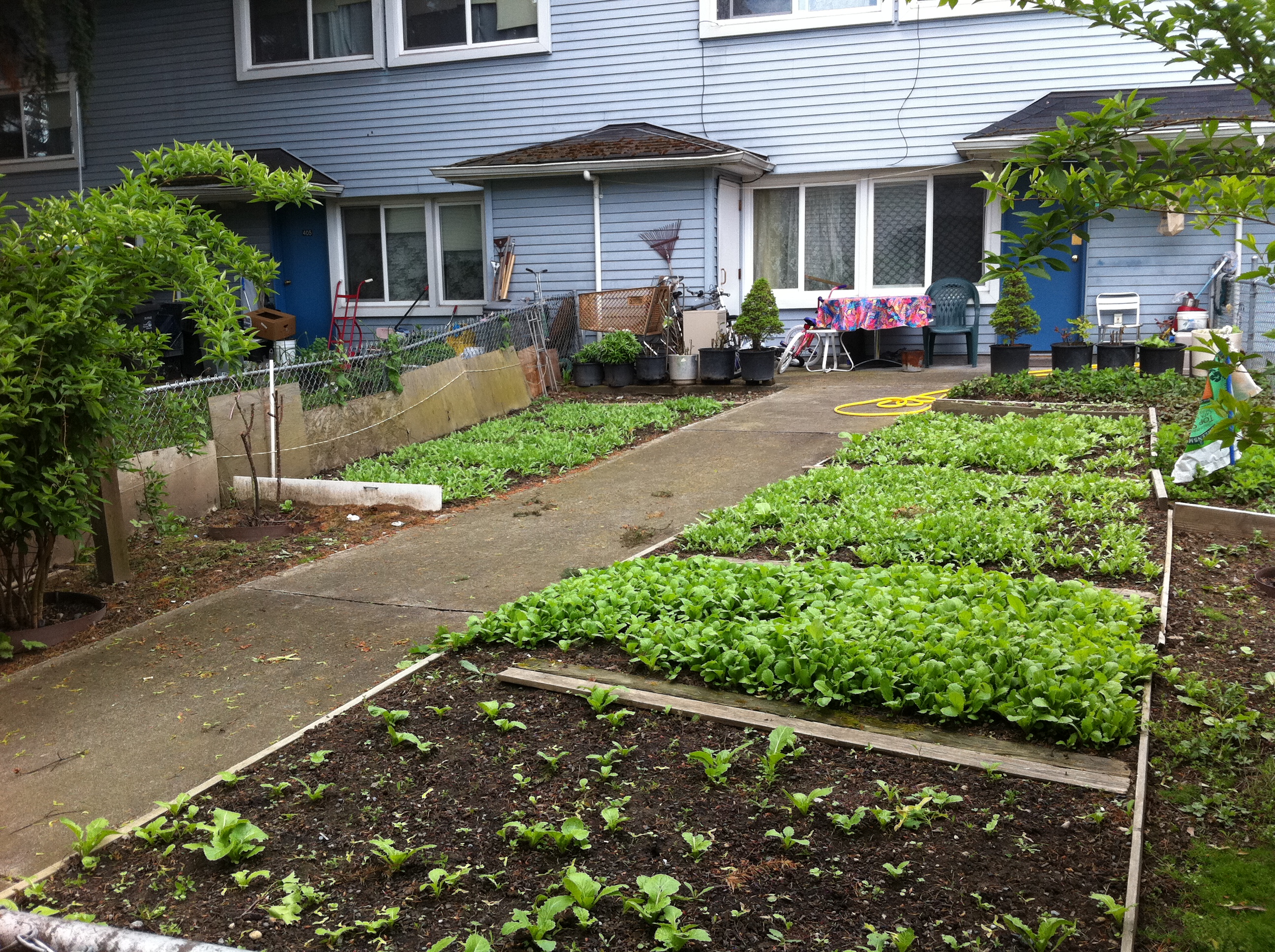 Another common use of the yard space in the neighborhood is row farming. Residents will use their back yards, the neighborhood p-patch or other neighborhood space to grow vegetables. Some will then load up a grocery cart or other vehicle and take the food down to the International District to sell at the market. Urban agriculture becomes a side business for residents, and it’s hard to imagine finding food for sale that is more local than Yesler Terrace vegetables.

Urban agriculture in the neighborhood also got a boost last year with the start of GroundUP Yesler, a project that is working to reclaim some space on the hill overlooking I-5 as gardening space for residents, particularly youth. The program was profiled on Green Acres Radio in late March:

A stone’s throw from the interstate, this grassy hillside with views of Puget Sound and Safeco Field, is being “reclaimed”. The two and half acres of land are on the south slope of Yesler Terrace Housing. The Seattle Housing Authority plans to redevelop the project with high rises and town homes. “So we won’t be able to keep it forever.” Still Floyd says he and others growing food here want to show the capacity of urban ag, a capacity driven by community need. “Yeah, we’re going to have a good case to present to the SHA to say we should do this again in the next development.”

The city council will have the chance to weigh-in on on the SHA’s plans for the neighborhood this summer. O’Donnell would prefer the SHA look into renovating the existing housing, but the SHA is not considering that option. Others, such as GroundUP Yesler are working to try to have their interests included in the new plans. O’Donnell said the plan is like “selling half the farm to keep the rest of it going,” but others point to the social, environmental and economic benefits of dense, mixed-income neighborhoods, especially in locations so close to all the jobs in the central business district.

In the meantime, the residents of Yesler Terrace continue to reinvent the spaces available to them, many of them creating businesses and utilizing the help available to work their way into a private housing market they previously could not afford. As plans for redevelopment move forward, there are lessons in the neighborhood today that need to be understood and preserved before they are buried under 26 stories of urban highrise.

0 thoughts on “A new Yesler Terrace, Part 2: A housing project that works”