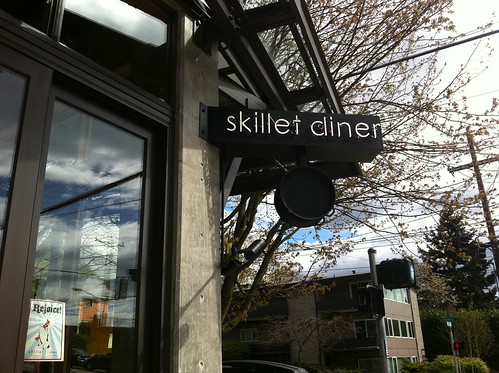 The upcoming Skillet Diner at 14th and Union is scheduled to open May 20, according to Capitol Hill Seattle. Owner Josh Henderson said he wants the diner to be a neighborhood destination, opening at 7 a.m. every morning and staying open until midnight during the week and 2 a.m. during on weekends. That means late night poutine and early morning espresso in the neighborhood.

The menu at the storefront Skillet location will be much larger than the menu at their popular mobile food Airstream trailer, Henderson told CHS in march.

“I’d love for us to be a neighborhood place and filled with people who live here,” he said. He picked up two of the skillets given to him in . Give Skillet your pan and you’ll get a $40 gift certificate. The donations, Henderson says, will be displayed on the east wall of the diner by the dozens — a wall of skillets.

You can follow Skillet on Twitter to keep up to date on their trailer and the new diner.