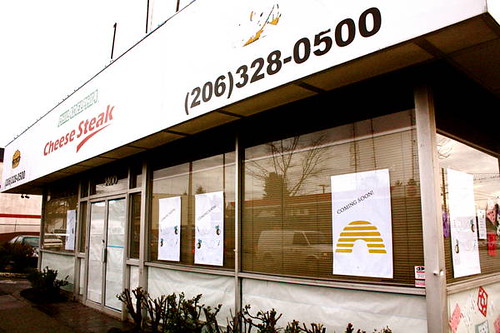 As far as symbols and deeper meanings go, we won’t get too far into it — though cleansing the tragedies of the corner of 23rd and Union with something as bright and happy sounding as a Beehive Bakery is an irresistible connection. But now that it’s been five months since we reported that Ian Eisenberg and business partner Ken Hovde were cooking up a place that would be “more bakery than coffee shop” in the old home of Philly’s Cheesesteak, you are probably ready for a flaky pastry and a cup of coffee. Unfortunately, we can’t tell you when your order will be up.

CDN reached out to Eisenberg and Hovde to find out the latest on Beehive but didn’t hear back on status of the project. Eisenberg referred us to Hovde. Hovde hasn’t yet responded. In late December, Hovde told the Seattle Times the bakery was slated for a February debut. Eisenberg’s Seattle Suds car wash is a Central District News advertiser.

The old cheesesteak shop has sat empty since 2008. Rey Alberto Davis-Bell was convicted in the 2008 murder of Degene “Safie” Dashasa.

For good reason, a lot of the inquiries CDN gets about the bakery are laced with worries related to the 23rd and Union’s troubled past. As the corner sees new investment and initiatives, worries persist that things will slip back to normal after the Mayor makes his visit. But not everything is a march toward ruin. See? The 23rd/Union gas station came back. We’ll keep checking on Beehive.

0 thoughts on “Seriously, 23rd and Union is ready for its bakery now”