Working with such large dimensions, constructing an extra large canvas and acquiring tons of paint is the easy part when creating a piece of public art. The hard part is figuring out how the art can connect with the community where it will be installed. 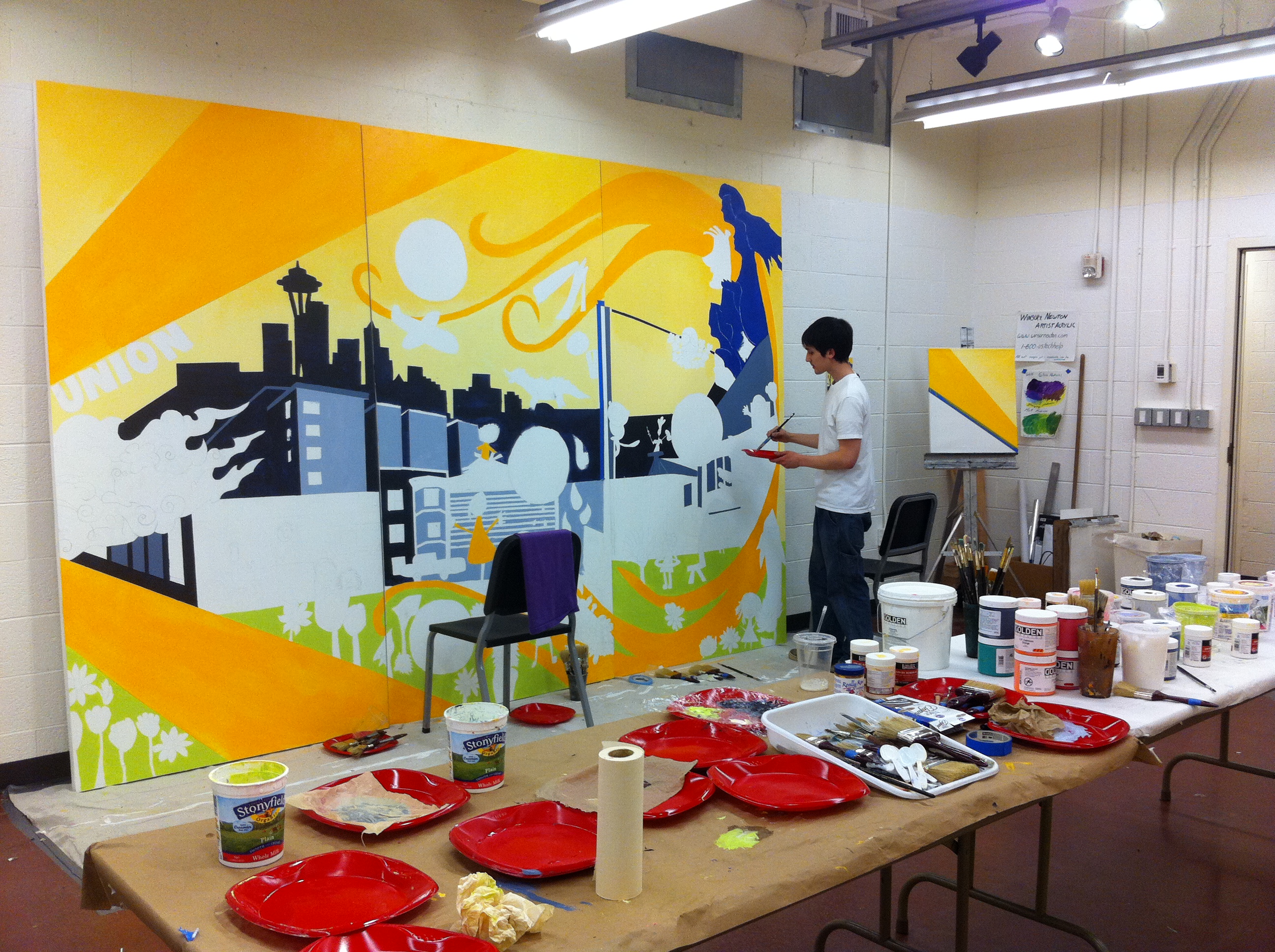 This is the challenge facing the students of Danila Rumold, the professor teaching Art 293: “Community Art & Mural Painting Techniques,” a new class at Seattle University. When the class started work to create a mural to go next to the Bailey Gatzert Elementary School playground, they first needed to learn more about the diverse students who attend the school.

“How do they identify themselves? What do they want to be when they grow up?” These were the kinds of questions the class asked the students. Though the student body at Bailey Gatzert speaks many languages, they were asked to respond by drawing pictures of their own. The class collected hundreds of pages worth of student pictures and stuck them up around their art studio on Seattle University campus as inspiration.

“We found a lot of overlap in the answers,” said Rumold, “so we made lists of what professions they want to be when they grow up and who their role models are.” Students also took photos around the neighborhood. Using these images and the drawings, the class created a collage. They then created a drawing out of that collage that would be a grayscale blueprint for the mural. 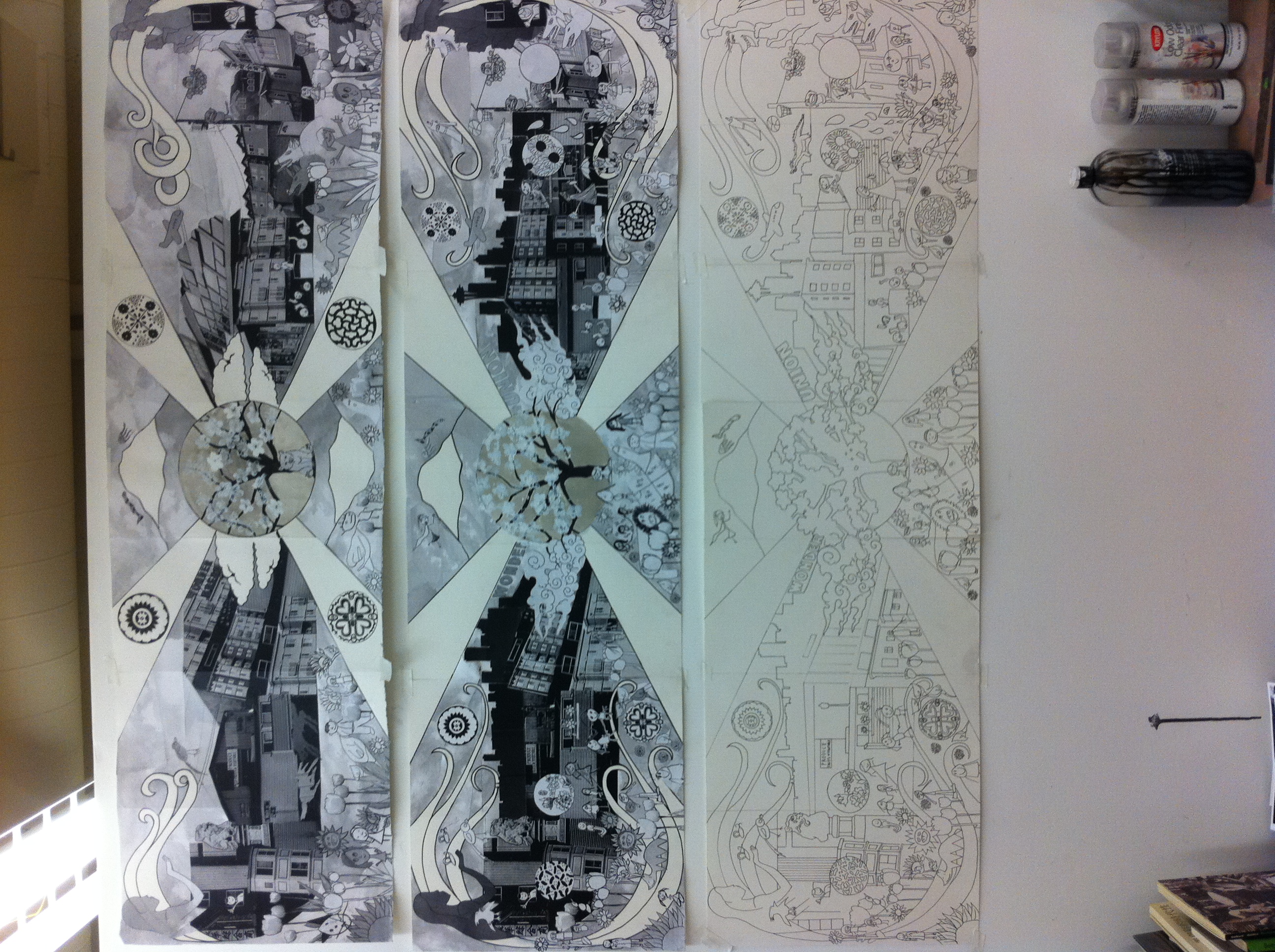 The original collage is at top, a drawing sketch is in the center, and an outline is at the bottom

The design’s center is a radial dial with a tree in the middle and rays stretching out across a backdrop of the city and neighborhood skyline. Wind and water waves on each side of the mural help create a border to complement the actual cherry trees situated on either side of the mural’s expected installation site on the south side of the playground.

One of the challenges facing the class is that the mural is not being created on-site. They have created a large wooden canvas out of marine plywood and do the painting in the class’s studio on campus. They hope the work will be weather proof enough to last at least ten years.

Members of the class have gone to morning drop-off breakfasts at the school to run ideas and images by students and parents to get feedback.

“The community needs to feel involved,” said Rumold. “I’m not sure if we’re making that connection.”

“We’re hoping the stamping will bring people into it,” said Rumold. The class has been discussing the socioeconomic gap between the largely middle-to-upper class Seattle U students and the largely impoverished Bailey Gatzert families. The project complements the Seattle University Youth Initiative the school launched this year. 90 percent of students at Bailey Gatzert receive subsidized lunches, which is the highest rate in the city.

“We need to make sure we’re not making it a missionary project, but rather a collaboratory project,” she said. The class is working to find commonality so there will be resonance with the community once the mural is installed. And Rumold has faith in the power of arts to bridge gaps.

You can learn more about the project or follow the class’s progress on their blog. The inauguration of the mural is scheduled for June 20.