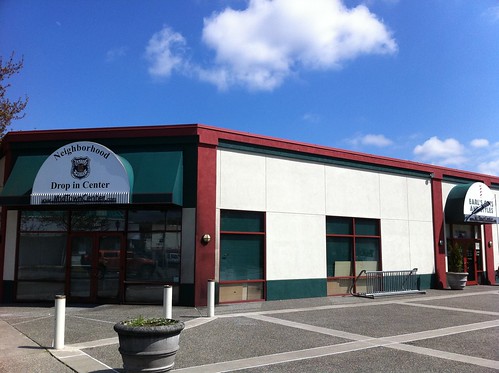 Work is under way at the Midtown Center at 23rd and Union to move things around and create a new neighborhood drop-in center. Quality Tax, which is currently located south of Earl’s Barber Shop, is moving to the corner space that until recently housed the Seattle Police Drop-In Center. A new space, operated by the Union Street Business Group, will be created between Earl’s and the new Quality Tax location.

“It will be like a mini chamber of commerce,” said Tom Bangasser, owner of the Midtown building. The office, which has been in the works for a while, will be a space where people can stop by and see design drawings or plans for proposed projects, among other uses. SPD officers will also be able to use the space to make calls or complete paper work, as some officers had been doing at the previous drop-in center.

“We very much appreciate the property owner’s accommodations for us to be in that space,” said Seattle Police East Precinct Lieutenant Joel Guay. “When it’s done, the police presence will be appropriately a lot less in-your-face.”

The building is also getting something of a makeover. The big SPD shield on the drop-in center sign, which was intended to send a message to people engaging in criminal activity at the corner, will be coming down.

“That’s not as needed now as it was,” said Bangasser. The building will also get new awnings to replace the current ones, which Bangasser called “tired.” A designer is currently working on new awnings, and Bangasser hopes to have most of the project completed by the June 4 Central District Garden Tour.

The SPD Drop-In Center has been the target of vandalism in the past year. Two people were sentenced to community service after smashing the center’s windows last July. Arsonists also targeted the center in February during weeks of heavy protests against police brutality. However, Bangasser said the vandalism to the property, which he allows SPD to use for free in exchange for their increased presence, was not a factor in making the changes.