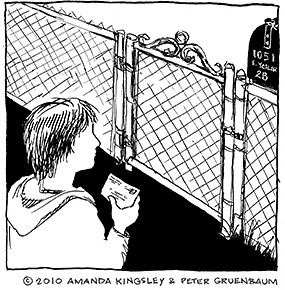 Peter Gruenbaum started writing the story behind Coiled during the several years he spend as a teacher at the Yesler Terrace computer lab. Though the story started as a young adult novel, Gruenbaum changed direction and turned it into a serial web comic, releasing one page every Wednesday (start from the story’s beginning).

The story is a sci-fi adventure about a boy on a search for his mother, who has mysteriously gone missing. The boy’s search leads him to Yesler Terrace, where his mother once lived. Amid all the different languages and cultures in the neighborhood, the boy at one point says he feels like he has stepped into another country.

“The character comes into that world from the outside like I did,” said Gruenbaum. His company, SDK Bridge, specializes in teaching and writing about technology. For years, he taught computer classes to Yesler Terrace youth.

“I was teaching middle school groups that are underrepresented in technology,” he said. The subject matter of his classes ranged from 3D modeling to digital music to creating a rhythm-based video game. In one class in 2004-2005, for example, the students built computer models for buildings in their neighborhood. The Yesler Terrace Community Center was being built at the time, so the class created a model of the yet-incomplete building using the blueprints. Students were also given the chance to build their neighborhood however they would like (I asked if students chose to go with high rises like in the SHA’s plans for Yesler Terrace, but he said they mostly went with more small-scale buildings, like coffee shops).

Gruenbaum started writing the story behind Coiled at this time, but he gave up on it after getting about 3/4 of the way through it. Then he got the idea to revive the story as a graphic novel and found Amanda Kingsley, who used to run the Hi Spot Cafe in Madrona before moving to the peninsula. Neither of them had done a graphic novel before. Gruenbaum said he sends Kingsley the text for the panels, and she draws them and gives story guidance and feedback.

Gruenbaum estimates that they are about a sixth of the way through the story, and expects to have completed the first book by the end of 2011. He also said he hopes to teach again at the computer lab soon.