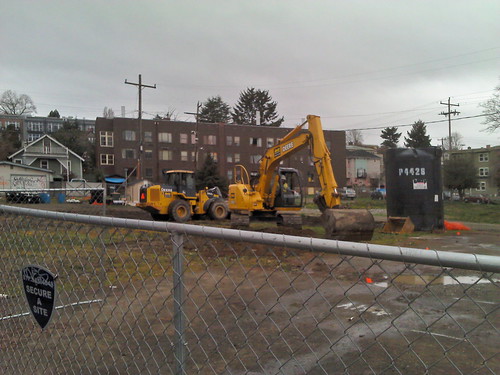 There’s some heavy equipment and a big black tank mucking around the empty lot at Madison & 22nd (diagonally across from Safeway). Is the redevelopment on this site finally picking up?

According to property owner Jim Mueller, those tractors are breaking ground on a new 12-story campus to house CHS and Central District News operations. Our combined staff of 401 editors, trained iguanas and freelancers have officially outgrown the rabbit hole beneath the Cal Anderson artificial playing field we have been using for an office.

April Fools! Mueller ACTUALLY said the tractors are there as part of the environmental cleanup they have been doing on the property. There is no new progress to report on the stalled 222-unit mixed-use project kitty-corner to Safeway,  said Mueller.

The 2026 E Madison development is just one of several projects on E Madison and in the Central District that remain stalled after the recession brought much development to a standstill. If this project and a slew of other planned E Madison projects are completed, the street will look quite different than it does today.