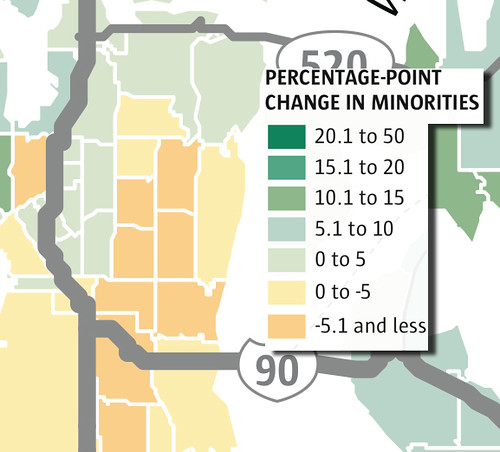 An article in the Economist looks at the nationwide trend of black people fleeing cities for the suburbs, and they use the Central District to illustrate the point. The percentage of black Americans living in the suburbs has risen about seven percent in the past years, Census data shows. Today, about half of the country’s black population lives in the suburbs. The effects are good and bad, according to the article:

This is proving a mixed blessing. Well-educated blacks are finding better jobs, bigger houses and newer schools, just as white-flight suburbanites did in previous generations. But many lower-income migrants from the inner cities are finding poverty, crime and poor social services when they arrive in their new homes. In the past decade, poverty has increased more than twice as fast in the suburbs as it has in the cities.

The the effect is particularly apparent in Seattle and Portland, “two of America’s whitest big cities.” Charlene Williams, owner of De Charlene’s Beauty Shop & Boutique at 21st and Madison, described how the neighborhood has changed since she opened up shop in 1968.

We wrote about the 2010 Census data a few weeks ago, using an interactive map by our news partners at The Seattle Times. Since then, The New York Times has also created an interactive map, breaking Census data down into even more data sets. These sets show population changes by race or ethnicity as well as changes in vacant housing and population density.

The black population has increased in most other parts of Seattle. The High Point neighborhood of West Seattle and parts of Rainier Valley — particularly the Census block between Beacon Hill and Othello — saw some of the largest growths in black population in the city.

The largest increases are in the suburbs, though. Black populations more than doubled in parts of Renton and Skyway, for example. Sea-Tac and Tukwila also saw large increases. 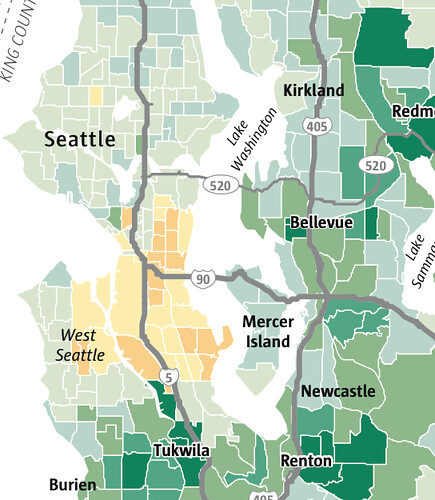 0 thoughts on “The Economist: Black residents leave the CD for suburbs”