It was the first housing project of its kind. Built on steep ground, the homes had great views and yard space. And, at the time of its completion in 1941, Yesler Terrace was the first racially-integrated housing development in the United States. Jimi Hendrix grew up in Yesler Terrace. So did Gary Locke, the U.S. Commerce Secretary who was recently nominated to be the U.S. Ambassador to China. When Locke was elected governor of Washington, he was the first Chinese-American in the country to be elected governor.

But the Seattle Housing Authority, which operates Yesler Terrace, is looking to redevelop the neighborhood block-by-block, selling much of the land to private development in order to fund a modern urbanist vision of sustainable high density, mixed-income housing. There is little debate that the aging housing units need renovation, but there is debate over how far the redevelopment should go. 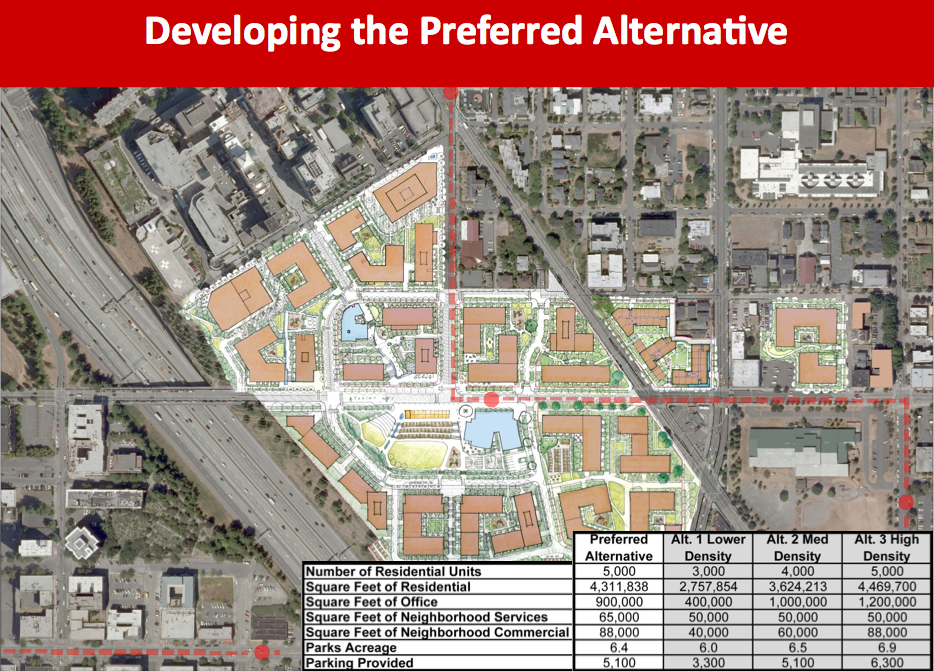 From SHA. Note that building locations are merely demonstrations of where kind of buildings could go

The number of low-income housing units will be preserved, but market-rate units will make up the majority of units when and if the several-decades-long plan is complete. The SHA’s preferred alternative includes 3,199 new market-rate units as well as commercial space, such as retail fronts and office buildings. An additional 950 units would be available for people making up to 80 percent of the area median income, which is about $45,000 a year for a single person. 290 units will be available for those making up to 60 percent AMI ($35,000/year for a single person). The 550 “extremely low-income” units currently available in the neighborhood (30 percent AMI or $18,000/year for single person) would be preserved, said representatives from the SHA and project designers during a brownbag presentation and discussion hosted by Great City March 22. The median income for Yesler Terrace is currently $10,500 per year.

The SHA is pursuing this mixed-income strategy because they say it is a model that works, both socially and financially. Concentration of poverty is not necessarily a good thing, they pointed out during the brownbag. However, some Yesler Terrace residents find this attitude to be condescending, according to the Seattle Times:

That means packing in a lot more people — as many as 8,000 — most of them affluent. Bring it on, says the housing authority, because the latest social experiment in public housing calls for renters to live in communities where income levels are mixed, not in enclaves of poverty.

A fine idea, if not for the “inconvenient reality,” says resident Kristin O’Donnell, that Yesler Terrace is a “community that works, that gives people easy access to the outdoors, gardens, views — and is walking distance to downtown.”

The people here already feel pride of place. Do they really need to live closer to middle-class role models? Is that compassionate or condescending? Progressive or patronizing?

“Just because you grow up close to someone with privileges,” O’Donnell says, “it doesn’t mean it’s going to give you any.” 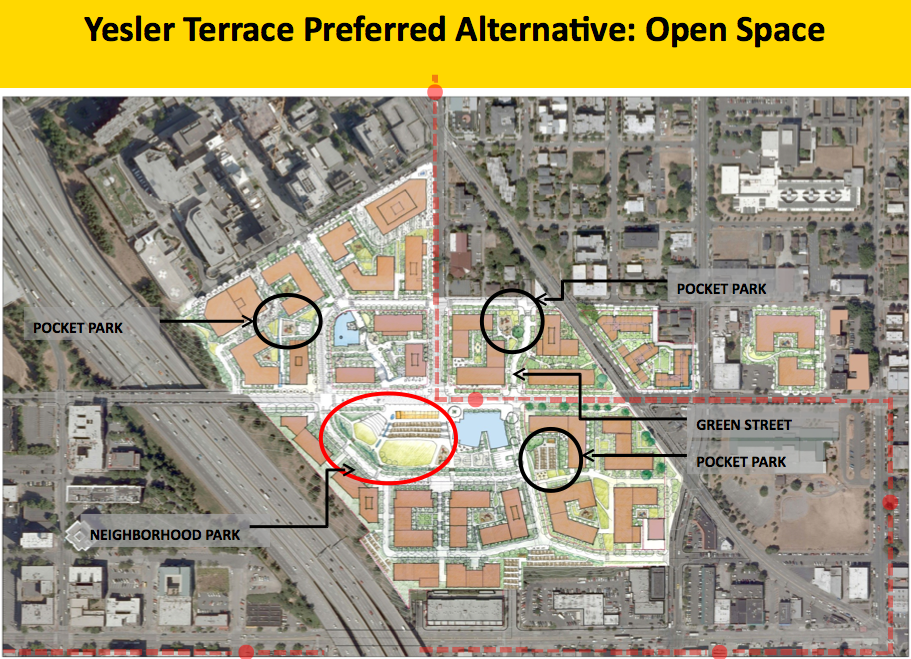 As high density housing moves in, residents will have to say goodbye to private yards. However, plans include a series of “pocket parks.” The neighborhood will also become more walkable by connecting Main St to the rest of the neighborhood and focusing on keeping walking connections through the developments. The goal is to utilize and maximize the ability for future Yesler Terrace residents to use the transit connections nearby, such as the First Hill Streetcar which will connect Yesler Terrace to the International District and Capitol Hill once it is completed in 2013.

Some have hopes that Yesler Terrace can be a standout example of sustainable urban living in Seattle. Yesler Terrace development may be an opportunity for using district energy, for example, and the city is currently looking into the feasibility of such a system there.

However, others doubt the SHA’s commitment to preserving the low-income housing currently in the neighborhood. From Seattle Times:

Tenants, including Audry Breaux, worry that once they’re moved out during construction they won’t come back. They note that some 800 low-rent units were not replaced in the redeveloped Rainier Vista, New Holly and High Point. Instead, some tenants received rent-subsidy vouchers to live in privately owned buildings in other parts of the city. “Every time I think about it I just cry,” says Breaux, who’s lived almost half her 80 years in the project.

The Final Environmental Impact Statement on the project is due to be published in April. Legislation should go to the City Council in June for their approval.