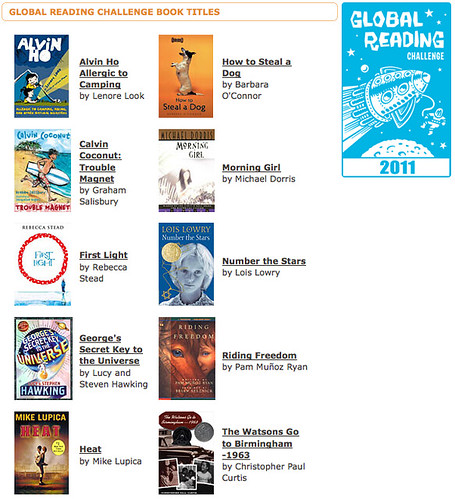 A team of fourth and fifth graders at Thurgood Marshall Elementary have made it to the finals in the Global Reading Challenge. They will take on teams from Canada via video conference April 15.

The GRC is basically a quiz bowl testing the reading comprehension of elementary school teams that were all given the same ten books to read. Originally one of 45 Seattle schools participating, the Thurgood Marshall Silver Falcons is one of two teams to make it to the finals. The Falcons and the Bryant Elementary Aqua will take on teams from Fraser Valley and Coquitlam in British Columbia.

The Seattle teams undoubtedly have the upper hand. Like a swimmer shaving off body hair before a race, the Thurgood Marshall Silver Falcons have gained speed and agility by dropping the letter “u” from words like “colour” and “honour.”

Joking aside, congratulations Thurgood Marshall readers on getting to the finals!

“Aqua” from Bryant Elementary School and “Silver Falcons” from Thurgood Marshall Elementary School will face the top teams from Fraser Valley, B.C. and Coquitlam, B.C. at 10 a.m. Friday, April 15 in the video conference final at the John Stanford Center for Educational Excellence, 2445 Third Ave. S. in Seattle. The public is welcome to cheer on the teams.

The Global Reading Challenge is a battle of the books program that encourages children to have fun and enjoy the sport of reading.

More than 2,500 fourth- and fifth-graders from more than 40 Seattle Public Schools studied ten books to prepare for the Global Reading Challenge.

The teams of children take part in a “Quiz Bowl” game to test their knowledge of the books.

Ten teams of fourth- and fifth-graders from Seattle Public Schools competed for the top spots in Seattle at the city final of the 2011 Global Reading Challenge on Tuesday, March 29 at the Central Library.