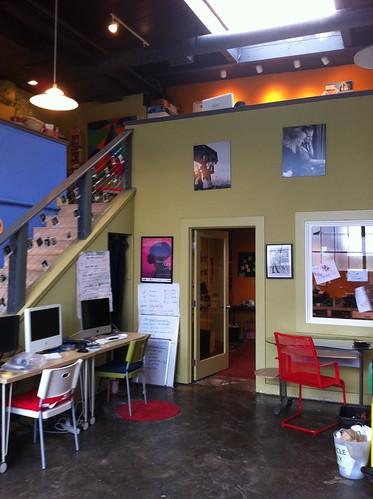 This spring break, a group of young women from all over the Seattle area will go from knowing little about filmmaking to completing a short documentary in just one week. With the guidance of Reel Grrls mentors, they will study the art of documentary films, learn how to use a camera and learn how to edit their footage into a finished short film.

Housed next door to Central Cinema, Reel Grrls is a non-profit with the mission to empower young women by teaching media production skills. Now that they’ve had three years to settle into their Central District home, the 9-year-old organization is going strong with afterschool programs, week-long camps and weekend workshops.

Like many other tenants in the Oddfellows Building when it was sold in 2007, Reel Grrls feared the worst. When new owners took over the building at 10th and Pine, the far-below-market-rate rents were sure to go up. Several organizations were not sure how they would keep going.

“When Oddfellows sold, it felt like a blow,” said Reel Grrls Program Manager Maile Martinez. But many of the organizations that survived and found new spaces are in better places, she said. Now that they have their own programming space and the opportunity to use Central Cinema’s theater as a classroom, Reel Grrls is “more able to offer programming on our own terms,” she said. Last year, the organization won the Mayor’s Arts Award.

Many of the young women who attend RG programs are from the area, but some come from as far as Whidbey Island, Vashon Island and Bremerton. Some attend Garfield, some attend private schools and some are homeschooled. Encountering people they may not have otherwise is one of the great things about the program, said Martinez.

The Spring Break Documentary Arts Camp is the first time the class has focused specifically on documentaries. The program, which runs from April 18-22, is now open for registration. The recommended cost is $295, but the program is pay-what-you-can. Nobody will be turned away for lack of funds.

“We’re willing to work with whatever you can manage,” said Martinez. “If the full amount is manageable for your family, that’s great and helps underwrite the program.” The camp will be full once enrollment reaches 20, and it is effectively first-come, first-served. No previous film experience is necessary. Online registration is also open for the summer Teen Video Camp and Animation Camp.

Here’s an example of a Reel Grrls short documentary, directed by Lena Takamori:

Ode to the Eyebrow from Reel Grrls on Vimeo.