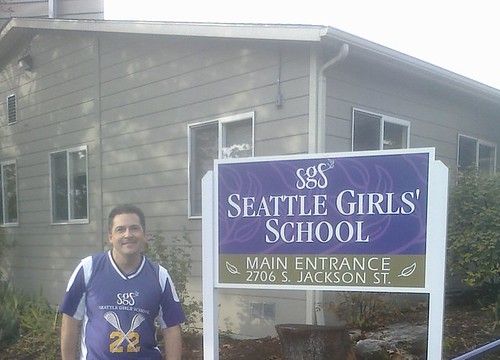 Seattle, March 21, 2011 –The Board of Trustees of Seattle Girls’ School today announced the appointment of Rafael del Castillo as its new Head of School. For the past year, Mr. del Castillo has been the school’s Interim Head of School. In his new role, he will be responsible for leading the 120-student middle school into its second decade and ensuring that it continues to serve the mission to develop and inspire courageous leaders and empower girls to their full potential.

“Our second decade will see us build strong and durable foundations so that Seattle Girls’ School becomes synonymous with excellence in all that we value: thoughtful stewardship, shared leadership, effective collaboration, critical and creative thinking, and innovative academics – and not just in girls’ education, but in education period,” said Mr. del Castillo.

Mr. del Castillo became the Interim Head of School after founding head Marja Brandon resigned from the position last year. He first joined Seattle Girls’ School (SGS) in its second year as a member of the inaugural 7th grade faculty and as Curriculum Coordinator. He later became Assistant Head of School, with responsibilities ranging from coordinating the PNAIS accreditation process to managing faculty and programs. He led the team reviewing the school’s mission and partnered with the Board of Trustees to develop the Seattle Girls’ School Strategic Plan.

An active leader in the Seattle community and a strong advocate for girls’ education, Mr. del Castillo served as a board member of the Northwest Girls Coalition and is currently on the Board of Trustees at The Meridian School.

In addition to his administrative leadership, Mr. del Castillo is an experienced math and science educator. Prior to joining SGS, he worked as a teacher, curriculum coordinator and department chair in elementary and secondary schools such as Villa Academy (Seattle), the International School of Prague, the American School of Madrid, and for the Archdiocese of Miami.

“Rafael’s proven leadership skills, his personal integrity, his passion for innovative and equitable education, and his eight years of experience with the school make him the ideal choice to lead SGS into its second decade,” said Heather Singh, chair of the Board of Trustees. “The Board unanimously supports the recommendation of our Search Committee, who conducted a nationwide search, and we feel fortunate to have found such an engaging leader on our own campus.”

The school’s Search Committee was composed of six members of the Seattle Girls’ School community at large. After an eight-month, nationwide search, they unanimously recommended Mr. del Castillo to the Board of Trustees. Mr. del Castillo will officially move into the role as Head of School during the summer of 2011.

About Seattle Girls’ School: Founded in 2000 by a group of passionate Seattle residents who believed girls’ education was important and significantly improved when approached with the knowledge and understanding of what helps girls learn and thrive in any setting, Seattle Girls’ School is a middle school (grades 5-8) committed to empowering young women to be leaders in their communities. It offers a challenging academic program focused on collaboration, integration, and real-world problem solving. The school is dedicated to inspiring each and every girl to live her potential by creating a diverse community of learners who are encouraged to be passionate, thoughtful, and respectful agents of change. Seattle Girls School is accredited by the Pacific Northwest Association of Independent Schools (PNAIS). Learn more at http://www.seattlegirlsschool.org

Link to Strategic Plan on linked-in: