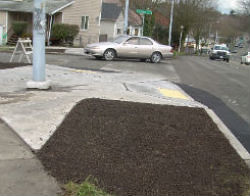 SDOT has finished work on a new curb bulb at Terrace and 23rd ave in front of Garfield High School. The redesigned curbs shorten the distance from curb-to-curb and now have ramps, making it easier and safer to cross Terrace on foot, in a wheelchair or with a stroller. The project does not make it much easier to cross the busier 23rd Ave, which is among the most dangerous streets in the city for pedestrians.

SDOT just completed building a new curb bulb across from Garfield High School and adjacent to a local daycare.  The pedestrian improvement at 23rd Avenue and E Terrace Street shortens the crossing distance for pedestrians by narrowing the street opening.  In addition, the newly-installed curb ramps not only meet the Americans with Disabilities Act requirements, but also accommodate strollers coming and going from the daycare.

This new pedestrian safety feature has been over three years in the making and involved many people from the community and several city of Seattle departments.  Following the renovation of Garfield High School, there was community interest in also making street improvements around the school.  Feet  First,  a non-profit pedestrian advocacy organization, did a walking audit of possible improvements and the community applied for funding through the Neighborhood Street Fund large projects and Neighborhood Project Fund.

This project was funded through the Neighborhood Project Fund which provides funding for projects that  the Department of Neighborhoods District Council, SDOT and Seattle Parks and Recreation have  selected and recommended to the Mayor based on specific  priorities.  That criterion includes the following concerns:  The project will have a widespread positive impact on the neighborhood as a whole; implements one or more recommendations in an adopted neighborhood plan; has the support of multiple neighborhood or community groups; also qualifies for funding from another City source. 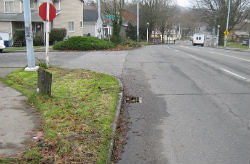