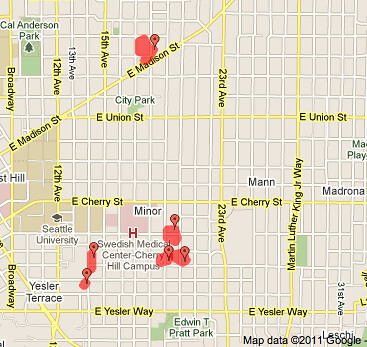 An afternoon lightning strike near East Madison has left about 135 customers without power as City Light crews work to replace blown transformers.

Scattered outages on Capitol Hill and in the Central District have been reported related to the lightning jolt that produced a large boom just before 1:30 PM Thursday afternoon.

According to a City Light spokesperson, service will be restored in patches over the next few hours as the heavy transformers are swapped out by the two crews called out to respond to the damage.

The spokesperson said lighting damage to City Light equipment is an extremely localized phenomenon meaning the strike occurred somewhere near the main outage zones between East Madison and the Swedish Cherry Hill area of the Central District where 85 customers were without power.

The East Madison outage area is near the tall television and radio towers that loom over the neighborhood. It does not appear that operation of equipment at that facility has been affected by the current outage.

You can monitor progress on the City Light status page at http://seattle.gov/light/sysstat/