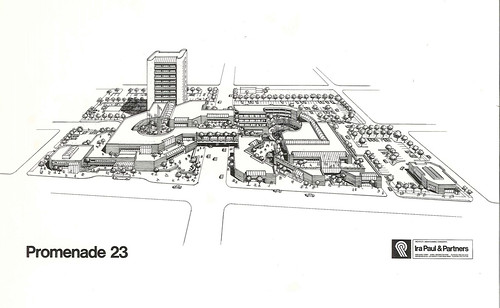 Aspirations for the Promenade 23 shopping center at 23rd and Jackson once included a two-block development complete with sky bridge. This vision was lead by a young Jimmy Sumler, who owned the property along with his father in the 50s and 60s, according to George Staggers of the Central Area Development Association (CADA). Today, the shopping center may not have a sky bridge, but it is an economic hub of the Central District. It is also on the verge of being sold to Weingarten Realty Investors, a large real estate investment trust based out of Houston, Texas.

After costs for a shopping center soared, David Best joined Sumler as a partner in Promenade 23. The section of the center south of Jackson, which now houses Red Apple, was developed in the late 70s. However, the development of the north section would not get moving until the early 90s, after John Miller joined Sumler and Best as a partner in the 80s.

The shopping center then developed into what it is today. Along the way, the Starbucks on the northeast corner of 23rd and Jackson became the first standalone Starbucks in the country, said Staggers. CADA, which formed in 1994, is now a 1 percent owner of the property.

But at the start of the new century, ownership of the property began to change. Sumler passed away, and his interest in the property was split among his heirs. A few years later, Best passed, as well. For the past couple years, Promenade 23 has been looking for a buyer.

Weingarten owns 70 million square feet of property in 21 states, according to their website. In Seattle, they own Rainier Square Plaza at Rainier Ave and S Charleston St. in the Mt. Baker/Columbia City area (where Safeway and Ross Dress For Less are located). The acquisition of Promenade is set to close at the end of March.

There were local buyers interested in the property, and it is unclear how much emphasis was placed on selling locally. CADA is asking residents to let the new ownership know what they would like to see from the shopping center. Attempts to contact Weingarten and Promenade 23 Associates have been unsuccessful.

0 thoughts on “Once an ambitious development, Promenade 23 sale to large Texas trust pending”