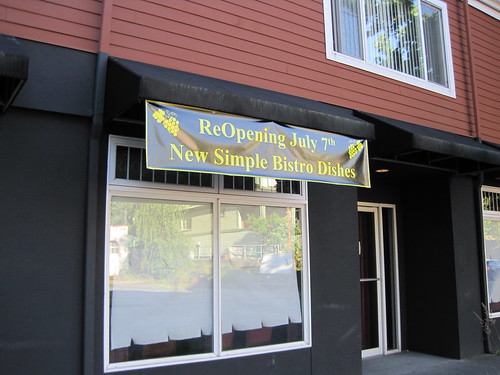 This weekend we noticed lights and movement in the now-empty Dulces space on 34th and Pike. It turned out to be Darren and Janine Pritt starting the opening process for their new restaurant, Pritty Boys’ Family Pizzeria.

Tentatively slated for an April 1 opening, the new restaurant will not serve wood-fired pizza (as previously reported) but will be a nostalgic take on the pizza parlors of Darren’s youth with a more classic pie. Darren, who also owns Belltown’s Branzino, has Branzino’s chef Quinton Stewart consulting on menu development. While they’re not shooting for high-end gourmet, Janine says, “we want it to be good pizza.”

They plan to offer takeout (though not delivery) and be open for lunch and dinner, with additional options like pastas, appetizers and salads. There will be gluten-free, dairy-free and vegan options as well.

The atmosphere will be uber-family-friendly along the lines of nearby Madrona Eatery & Alehouse and Vios on Capitol Hill. The Pritts, who live in Madrona and have three sons ages 12, 10 and 1, wanted to create a neighborhood restaurant that everyone in a family could enjoy. So they are planning a devoted play area for younger kids in the main dining room and a game room for older kids in what used to be Dulces’ cigar room, with a Nintendo Wii and other electronics in an updated take on pizza parlor arcade games. They’re installing old-style red booths with butcher paper on the tables.

“The whole idea is that you can go out with another couple and be able to sit down and have a glass of wine and eat and know that the kids are entertained as well,” said Janine.

That’s not to say that the restaurant will be entirely kid-focused – they’ll serve beer and wine, offer wi-fi, and have TVs installed to play sporting events.

Darren may be familiar to Madrona residents as one of the founders of the Neighborhood Cooking Association, which prepares monthly meals for the homeless at St. Clouds Restaurant.

And finally – yes, the Pritts are aware that take-and-bake Zaw Pizza is still expected to open just a block away (no firm news on the opening date, though we’re hearing March or April), but they feel their styles are different enough that competition won’t be too much of an issue.

What do you think of the newest dining destination to hit the neighborhood?

0 thoughts on “Family-friendly pizzeria plans to open in April; takes over Dulces space”