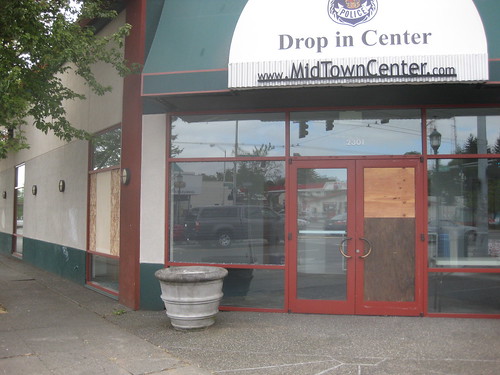 Two activists who smashed several windows at the Police Drop-In Center at 23rd and Union in July have been sentenced to community service. Patrick Joseph McGowan IV and Laura Ann Stahl pleaded guilty to attempted second-degree malicious mischief, a misdemeanor, as part of a plea agreement, the P.I. reports. They have been sentenced to 240 hours of community service and a 12-month deferred sentence. They will also have to repay the $1,091 in repair costs.

The judge shared the activists’ concern about police misbehavior, but questioned their methods. From the P.I.:

Imposing the sentence agreed to by prosecutors, King County Superior Court Judge Catherine Shaffer told Stahl, 23, and McGowan, 27, their actions — an apparent protest of police brutality — were “stupid” and misguided, in that they only succeeded in making it more difficult for poor people living in the area to get police help

“No one is getting beaten up at a community police service center,” Shaffer said.

Attorneys for the activists were described them as educated and active volunteers:

Attorneys for Stahl and McGowan described their clients as well-educated young people without significant criminal histories.

McGowan, his attorney said, has a “long history of social activism and volunteer work.” Stahl was described as a studious young woman who dropped out of the University of Washington one class short of a degree.

Offered an opportunity to address the court Friday, neither elected to apologize for or explain their actions. Instead, each remained silent as more than a dozen supporters looked on.