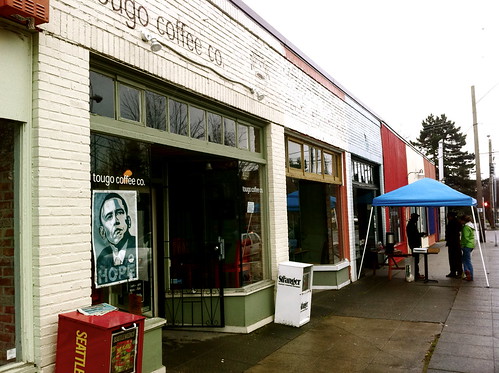 We’re learning more about the financial issues that have hit Tougo Coffee as owner Brian Wells continues his quest to raise donations to pull his business out of a $10,000 hole. We talked to Wells as he stood under a rain tent in front of his shuttered 18th Ave shop and greeted neighbors who stopped by to show support — as well as confused customers who had only stopped by to grab a cup of coffee. We are also gathering information from the city and others close to the situation to try to learn more about what happened to Tougo and what comes next for the Central District and Westlake shops. Here is what we know so far.

Because of unpaid City of Seattle business taxes going back over multiple two quarters of 2010, the license for Tougo Coffee Inc. to operate its business in the city has been revoked cannot be renewed, CDNews has learned.

But Wells tells us this is not a case of somebody trying to sneak one by the tax man. Wells is cautious about how much he will say about the tax issue because he says his work with the City of Seattle to get Tougo back in business is going well and he doesn’t want to jeopardize the progress. But he would tell CDNews that the unpaid taxes are the result of mistakes made by an accountant being paid to manage Tougo’s finances. “This isn’t a Bernie Madoff situation,” Wells said.

Wells said he needs to raise money to put Tougo back into good standing with the city and have his license reinstated. We are working to get more information from the city’s Revenue and Consumer Affairs but the department is typically reluctant to discuss particulars in cases like this.

Even once the city has agreed to reinstate the license, Tougo will still owe on additional quarters when its taxes went unpaid, CDNews has learned. The question of what happens to people’s donations if Wells can’t re-open is moot — there’s a big financial hole to fill with the coffee shops open or closed.

In the meantime, no word on whether Wells will be back under a tent on 18th Ave on Friday. You can keep in touch with Wells and the Tougo situation via the Tougo Facebook page.

0 thoughts on “What happened at Tougo — UPDATE”