According to the police report, officers saw a man sitting on a park bench near the Center and recognized him from past incidents. They ran his information, which showed he had a felony escape warrant from the Department of Corrections (DOC).

By the time the officers attempted to make contact with the suspect, around 1 p.m., he had gone inside the Community Center. They went inside after him and found him near the north entryway. The officers tried to place him into custody,

Here is the account of the arrest from the arresting officer’s report (missing words mean details have been redacted):

We attempted to place into handcuffs for our safety. We both know
that has an extensive violent criminal history including multiple
weapon and obstruction arrests. stiffened his arms and back and tried
to pull away from both of us. He attempted to pull us with him as he tried
to walk out of the . We told him multiple times to stop
resisting. He turned towards us and raised his hands as if to strike one of
us. We turned him back away from us. I placed his right hand into handcuffs
and pulled it back behind him as Officer Chin attempted to bring his left
hand back behind him. again pulled from us and was able to again
twist in front of us. His hands were in balled fists. We man handled him
back to facing away from us. He continued to try and turn to face us.
Officer Chin deployed his taser as we tumbled out of the center.
stood back up and turned back towards us again. His hands were in fists. We
turned him away from us and I deployed my taser. We took him to the ground.
We continued to struggle with him until multiple units came to the scene
and took control of him.

Medics responded to the scene for injuries sustained by Officer Chin and
Officer Chin was transported to and hospitalized at Swedish Cherry
Hill for a He will require extensive rehabilition and
suffer significant time loss due to his injuries. was cleared at the
scene for the taser applications and injuries sustained during the struggle.
I verified the warrant with Data.

During the struggle, was able to remove a three-inch glass vial from
his right pants pocket and break the lid off. Inside the vial was PCP
residue. Officer Wight field-tested the residue in accordance with
protocols established by the WSPCL. She received positive indications for
the presence of PCP. 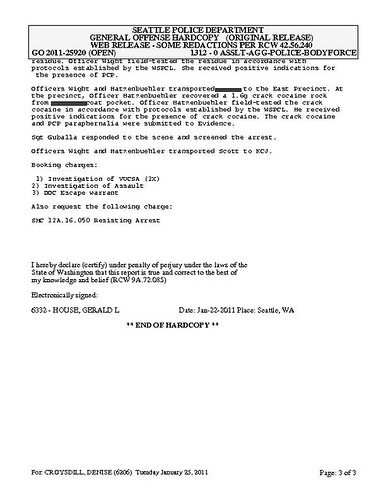