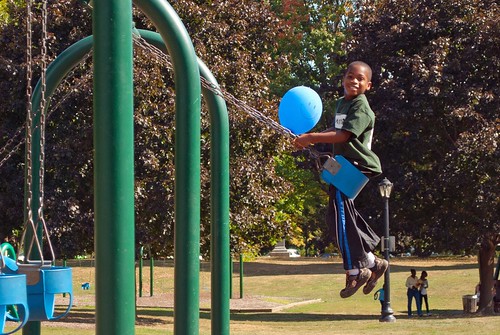 The next step to install new play equipment in Washington Park comes Thursday night as Seattle Parks hosts a public meeting to discuss the $50,000 project funded by a neighborhood victory in a recycling contest.

CDNews reported on the CleanScapes donation here. According to CleanScapes, 13 projects were submitted by neighborhood representatives, with members of their respective community councils serving on the project selection committee that ultimately agreed on the upgrades for Washington Park. The Madison Park Blogger has more details on the project.

Washington Park Playfield is located adjacent the arboretum and near Seattle’s Japanese Garden.

CleanScapes, Washington Park’s neighborhood solid waste and recycling service provider, has proposed a donation that would replace the existing swing set with new play equipment. The equipment would be installed in April 2011.

This project originated from CleanScapes’ 2009/2010 Neighborhood Waste Reduction Rewards program. The competition challenged city residents and neighborhoods to improve their collective waste reduction efforts between fall 2009 and spring 2010. The neighborhood collection day area that reduced their waste the most won this $50,000 community project, identified by citizens and built in the winning neighborhood.

The public is encouraged to come and learn about the swing set removal and new equipment proposal. For more information, please call Pamela Alspaugh, Sr. Landscape Architect, at 206-684-7328, or email her at [email protected]