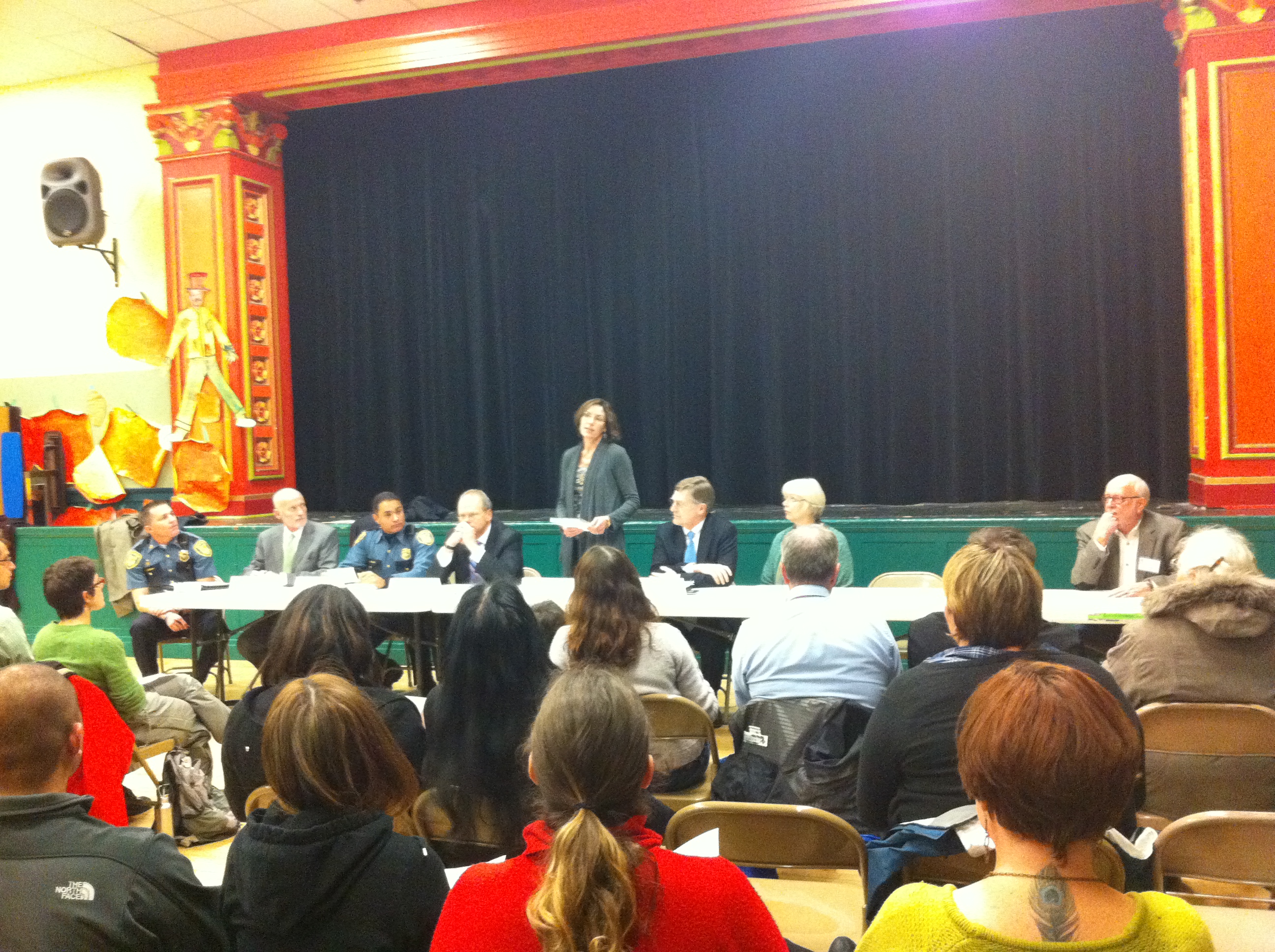 Representatives from SPD, the city, the county and the DESC at a November public forum

Jackson Place residents can either fight the opening of a semi-experimental crisis solutions facility in their neighborhood by trying to block building codes, or they can work with the project to make sure their interests are represented. These are the two options available to concerned residents, Councilmember Tim Burgess told the roomful of people who attended a public meting about the proposed Crisis Solutions Center at 16th Ave S and S Lane St in November. A group of those residents have chosen to fight.

“It was really mind boggling that that statement was even made,” said Kristin Wall of Burgess’ statement. Wall is a member of the Jackson Place Alliance for Equity (JPAE), a group that opposes the facility and has hired a lawyer to challenge the facility’s legal status under its current land use code. “As residents and community members, we have every right to be asking questions about this facility that is going into our neighborhood.”

“I don’t think the DESC is trying to dodge anything,” he said. They held the November public meeting and are holding another forum from 6:30 – 8 p.m. Monday, January 31 at the Giddens School, 620 20th Ave S. At the meeting, they will announce the creation of a committee that will invite community members — including members of the JPAE, the Jackson Park Community Council and other area organizations — to help create a formal Good Neighbor Agreement.

The proposed facility is unlike any other facility in King County. It is meant to serve as a psychiatric alternative for non-violent offenders who would otherwise end up in jail or the ER.

“A lot of people are being taken to the ER or jail by default because a more appropriate resource is not available,” said Bill Hobson, Director of the DESC and a Jackson Place resident. For many people, the ER and jail do not help them with their problems and can often make them worse. The new center is intended to be a “more therapeutic place for them to be in,” he said. Councilmember Sally Bagshaw, who formerly worked for the King County Prosecutor, called a facility like this “The Third Way” at the November meeting. Aside from providing more appropriate care for people in the midst of a crisis, it should save the city and county lots of money that is currently spent holding people in jail or the ER. The center has broad political support from the City Council, the mayor, the city prosecutor and King County prosecutor.

People will be referred to the center by first responders, either police or medical responders. Some of the clients will have been arrested before their referral, but their stay at the facility will be voluntary and people will be free to leave at will, said Hobson. Anyone who is violent or has a history of violence will be ineligible for admission to the center. Anyone who leaves will be escorted by DESC staff, and transportation will be provided to get them to their next destination. People cannot refer themselves to the facility, so there should be no walk-ins.

“Our goal is to be as low key and as much of a non-event as possible,” said Hobson of the effect the center will have on the neighborhood.

The bulk of the JPAE’s legal argument centers around whether the facility should be classified as a hospital or an incarceration facility. DESC maintains that stays at the facility are voluntary, but Peter Eglick, lawyer for the JPAE, claims that receiving patients through police arrest powers makes the facility more like an incarceration or work release facility than a hospital. These uses would not be permitted on a commercially zoned site, and changing the use would require a public review process.

Alan Justad with the Department of Planning and Development (DPD) said they are working on the JPAE’s Request for Interpretation, a public document that explains how the department made their decision to designate the center as a hospital instead of a jail. The review is also looking at one part of the facility — a building zoned L1 residential — that the facility is only using as an exit. It is unclear whether using the exit as part of the center would require a zone change, which requires a public review process. That document should be ready in a week or two, he said.

“We do feel that we are correct in seeing this facility as most like the hospital definition we have in our land use code, and not like a jail,” said Justad. Eglick said he is skeptical of how voluntary the facility will be.

“The idea is that the police are going to get people in custody to sign this form instead of just taking them to the jail,” he said. King County’s Request for Proposal (RFP), which DESC won, says the facility will have the power to hold people brought in with misdemeanor charges to up to 48 hours on a “Police Hold.” However, Hobson denies that the facility will hold people, and the plan to use police hold does not appear in the DESC’s response to the RFP.

“In the rare instances where they refuse to stay and refuse our assistance,” he said, “two staff will follow the person while they’re in the neighborhood.”

If not Jackson Place, then where?

“We hope they take advantage of that.” If not, the JPAE is “in this for the long-haul,” he said. But Hobson said Tukwila is an inappropriate location, and was only selected originally because of geographic boundaries in the county’s first RFP that were later removed as the project changed.

“The City of Seattle was unlikely to use the facility if it were located in Tukwila,” said Hobson, because SPD and Medic One personnel may not have the time and resources to make the trip. The Jackson Place location is ideal, he said, because it has good access to Swedish and Harborview hospitals and is centrally located between the SPD precincts and both I-5 and I-90. Of the 7-8 properties they looked at in the area, the one on Lane Street was the best fit, he said.

Hobson is confident the center will be created regardless of legal action.

“I think [legal action] is unfortunate because it would delay the project, but I don’t think it would stop it,” said Hobson.