In late 2009 Will Little and Brian Wells — who also owns Tougo Coffee — opened Cortona Cafe at the corner of 25th Avenue and E Union Street here in the Central District. The little cafe has succeeded where others might not have even tried with a community focus that has always pushed beyond coffee and waffles. A little more than a year since its opening, Cortona is placing even more emphasis on community. As it begins 2011, Cortona is transitioning to a nonprofit focusing on building community, reaching out to youth and young adults, providing job training, and more. It will also have a new leader. But, no worries. It will also continue to bring you delicious coffee, gourmet waffles, microbrews and wines, and free wi-fi. More on the changes, below. 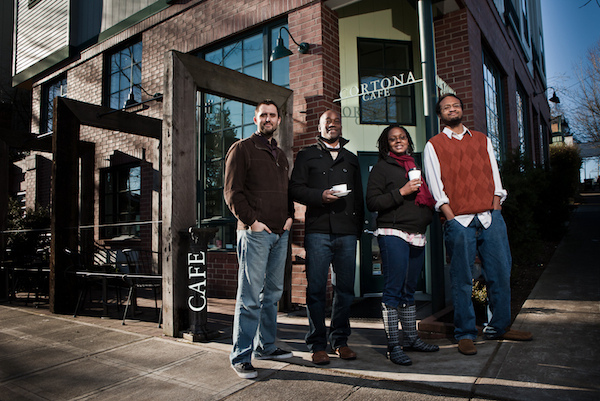 Will Little, Brian Wells, and Foxy and Jason Davison (left to right, Image: Will Foster, Courtesy of Cortona Cafe)

Here is Cortona’s stated mission on its Web site:“The Central District is a diverse community. Our goal at Cortona is to provide not only good coffee, beer & wine, waffles, etc…, but also a platform and meeting space for people of different cultures to discuss, teach, listen, learn, and build friendships.”  The mezzanine space is available to reserve for community events, seminars, group meetings, and more — all free of charge.  So the changes aren’t completely out of the blue.

Besides owning Cortona Cafe prior to the transition to nonprofit, Little also volunteers as a pastor at Mars Hill Church’s downtown location, but says there is no relationship between the new project and his position at the church. Cortona is also a CDNews advertiser.

Jason Davison, who has known Little since they attended college together at UW, now serves as the Executive Director of Cortona Community, the new nonprofit organization running Cortona Cafe. Jason and his wife, Foxy, both feel passionate about education and expanding youth opportunities in the area. Jason used to teach history at Cleveland High School and Foxy taught 4th grade at T. T. Minor, but they left teaching to move to St. Louis for graduate school a few years ago.  When they returned to Seattle, the Davisons knew they wanted to settle in the Central District because of the deep connection they felt to this diverse community.  As parents to small children they also felt strongly about establishing family-focused groups and providing opportunities for residents of all ages and backgrounds to come together and learn from one another.

There are a lot of issues affecting teens in the CD, like gentrification, said Jason.  “We want to work with youth that are caught, sort of lost in this phase of transition that the neighborhood is going through right now.” Little and the Davisons also see a lack of positive activities and job opportunities for young people in the Central District. These holes in youth services and outreach led them to want to develop a job training and placement program. With that in mind Cortona Cafe piloted this program last year by hiring two teens to work in the cafe. The teens learned barista and other food service skills and both completed the program and have moved on to other employment opportunities with solid training under their belts.

This spring Cortona Community will be working with other local businesses to bring teens on to their staffs for vocational training and internships.  They are in the process of building their board of directors and are pulling together community organizers and business leaders for this grass roots organization.

In the meantime, you won’t see too many outward changes at the cafe. Though they will be adding a couple of youth to their roster in the spring, the current employees will stay on board.  “They have a vibe with the clientele that is important and we don’t want that to change,” said Little.  The mood and setting of the space will remain as well, but prepare to see even more community events, particularly those geared toward teens and young adults.  Foxy said they are planning spoken word nights and expanding their rotating art collections to feature young artists.

Current established family nights and group meetings held at Cortona will also remain and some will be added.  There are family game nights held on Thursdays, which may be moving to the fourth Friday of the month, and a Sickle Cell education and support group meets on the third Wednesday of every month.  Starting on January 17th Cortona will also be hosting web development classes every other Monday night.  The classes will be geared toward young people and run through December, though students will be able to join the class at any time through the year.  Check out their calendar of events for more information and updates, and stop into Cortona to show your support for their expanded direction.