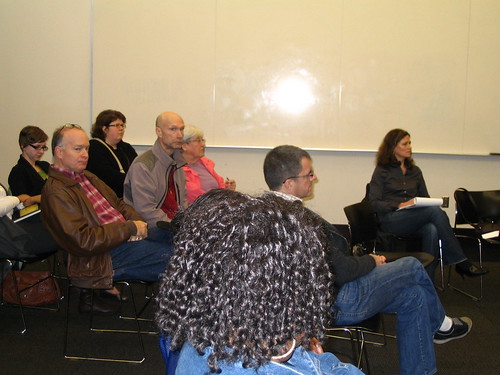 About 15 to 20 community members and parents attended the second and original/official School Board Director Kay Smith-Blum community meeting on Saturday morning at the Douglass-Truth Library (see Part I).   The more relaxed space and time allowed for a more focused discussion on each topic.  School budget, transportation, the World School (Secondary Bilingual Orientation Center), and Special Education were dominate, along with a question wondering if the School Board meetings are still  being televised or streamed live.

A representative from the the former Garfield Design Team raised questions about joint use agreements between the District, the community, and Parks especially in regard to the Quincy Jones Auditorium and Langston Hughes Cultural Arts Center.  He was also interested in pursing and finalizing some of the plans for the super block (23rd to 25th Avenues, and E. Alder to E. Cherry) as had been outlined in the Garfield plan.  While the District is not necessarily responsible for funding art and parking mitigation, he was hoping to reconvene the Team to, for instance, help the community decide on the art work which was suppose to represent all 5 of the major ethnic groups that have lived in the Central District.  This type of work is necessary in order for the community to pursue the funding.    Kay took notes and referred him to the new Director of Facilities, Bill Martin.

Director Smith-Blum indicated that there may have been some recent changes in the how the School Board Meetings are broadcast in response to a question.  The videos are definitely still available on Channel 26 and likely broadcast live there.  Videos of the meetings are streamed on the Seattle Channel but perhaps no longer streamed live.  She suggested contacting Erinn at the School Board office:(206) 252-0041.

While a representative from TOPS was the attendee to express concern regarding the new transportation plan, it is probably something many in Area 4 should note as there is a portion of Area 4 not within 1.25 miles of any school, especially  the assignment area school.  Under this proposal (yellow bus service) would not be provided to students attending and living further than 1.25 miles of their assignment area schools. These policies as outlined in the link below would profoundly affect Option schools.  TOPS presented Kay an analysis to demonstrate that carrying through with the transportation plan for TOPS may actually prove to be more costly than the current one.

A parent who had been a member of an advisory committee addressing Integrated Comprehensive Services (ITC)  questioned if the the current situation for the inclusion vs the self-contained rooms is being fairly represented to the Board by District staff.  Kay indicated that the Board is award of some the successes and some of the challenges, and that the Board may request a separate report with more details regarding the challenges and professional development in that area.

In response to budget concerns Kay indicated that the Board is definitely looking to keep those as much as possible away from the classroom.   The Weighted Student Staffing (WSS) formula determines much of the classroom staffing.  Leaving that alone is the number one priority.    Central Administration is still one of the main areas considered for cuts since Seattle still has a fairly high ratio of their funds going to the central staff compared to other similar districts. Renegotiating union contracts especially in the area of benefits is something she supports. Cuts to new more costly initiatives in the Strategic Plan are also under consideration.  Here Kay received kudos from representatives from the World School for her advocacy to protect the plans to allow students to remain at the school longer and until they are older.  Despite the fact that a community survey seemed to indicate that the public supported cuts to central staff and sports, the District is not considering cuts to sports.

Kay agreed with proponents to change or at least review the District’s difficult policies regarding allowing high school student to transfer schools at semester, especially in the case where the exit and receiving school agree that this would serve the student well.

Kay made two announcements:  A contract with Teach for America (TFA)  has been signed allowing their corp members to be considered during the third round of hiring.  In response to questions she said she supported taking a look at what percentage of new hires they would be.  She also let the community know that Garfield is working to eliminate the second year of sanctions for their football team.  The final decision on this should be known within a couple of weeks. 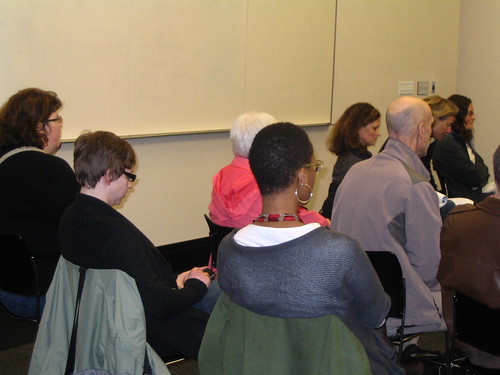