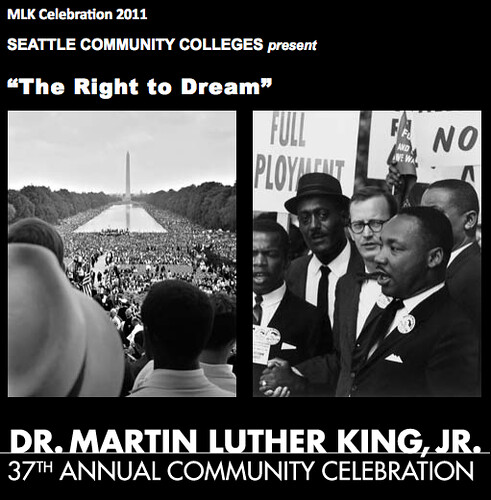 Seattle’s celebration of the 37th Martin Luther King, Jr. Day holiday will be centered right here in the Central District starting with a celebration and performance at Mt. Zion on Friday and culminating with the MLK Day March and Rally starting at Garfield High School on Monday.

“The Right to Dream” performance by Living Voices

A dramatic retelling of the early civil rights movement in the United States. An actor (Marcel Davis) playing the role of a participant brings the significance of the movement to life by interacting with documentary news footage from the 1950s and 1960s.

Information about Living Voices at livingvoices.org

Musical celebration with members of the Black Nativity Choir

The event begins at noon, Friday.

The annual march and rally, sponsored by the MLK Celebration Committee, will take place next Mon., Jan 17 at Garfield High School beginning at 9:30 a.m. The theme for this year’s special salute to MLK’s legacy is “Many Voices United to Build the Beloved Community!”

The event will begin with a series of workshops dealing with many current social justices issues important to our community. Then at 11:00am participants will gather in the Garfield High School gymnasium for huge community Rally.

The center piece of the salute to MLK will be community March beginning at 12 noon in front Garfield and ending at the Henry Jackson Federal Building on 2nd Madison.

Additionally, don’t forget about the King Holiday Hoopfest which starts Saturday at Seattle U.