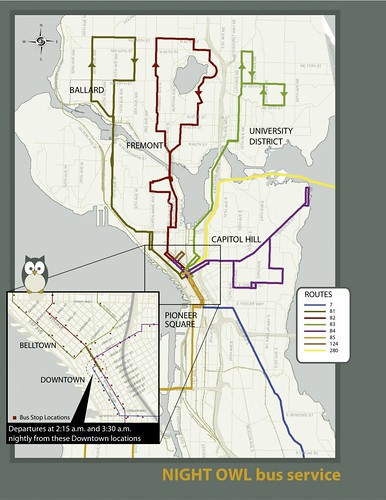 What was Seattle’s mayor doing at Washington Hall Tuesday night? Mike McGinn rolled out his office’s newly released Seattle Nightlife Initiative Community Report including strong support for later bar closing times and better late night transportation. We’ve pulled out some highlights and our takeaways from the report. Full report including survey results and feedback collected from various community meetings is embedded below.

Online, many were concerned about the relationships the Seattle Police Department and Washington State Liquor Control Board have with gay and lesbian nightlife venues. Respondents asked that officers with pro-gay values be assigned to enforcement at gay clubs and bars, and that more effort be made to crack down on anti-gay harassment and street violence, particularly in Capitol Hill. In response to these concerns, the Mayor requested an audit of the Code Compliance team’s enforcements to be completed by the city’s nightlife coordinator.

The Nighttime Disturbance Ordinance was passed by the City Council on August 2, 2010. It creates a new civil infraction for loud noise, threats or fighting that occur in a public place in a commercial or industrial zone between the hours of midnight and 5 a.m. The noise provisions of the ordinance were approved by the Department of Ecology in November and SPD is currently conducting officer training on the ordinance. Enforcement will begin in January 2011.

Here’s the Seattle Times take on the update. Full report from the mayor’s office is below. You can view the complete survey results here.