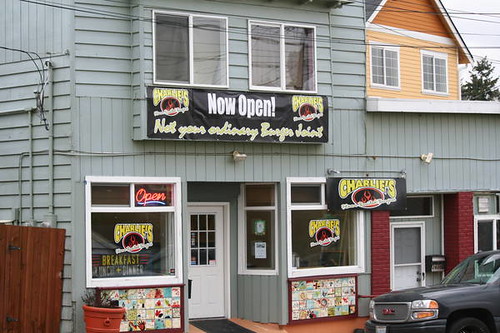 Despite a limping economy and a storefront that’s off the beaten path, 2010 has been a good first year for Charlie’s Flame Broiled Burgers. Owner Erika Urenda (pronounced yer-en-day) says that business has been pretty good. “We’ve gotten a lot of support from the community. We’d like business to be better, but we get what we get and we can’t complain.”

Manager Daniel Barraza is more enthusiastic about year one: “The first three quarters of the year went incredibly well. [Urenda] ended up buying another restaurant in Everett from what she made out of [Charlie’s].”

Reviews on Yelp and here on CDN have been just as enthusiastic. While some bad reviews indicate there have been rough spots, on the whole reviewers are big fans of the food and the friendly service. I certainly enjoyed chowing down on my Green Chili Burger (delicious even with veggie patty!) and shooting the breeze with Barraza while things were quiet.  While I’m sure my experience was skewed because I got dinner after the interview, my Yelp/CDN research indicates that my results aren’t far from the norm.

As I was walking up to the storefront from the bus stop on MLK Way and Judkins, I had an experience that many other customers have had before me: I wasn’t sure how much I could expect from a place that’s tucked back in a residential neighborhood in the first floor of a little clapboard townhouse. But like Barraza says, “People come in here and see a hole in the wall and don’t know what to expect. Once they try the burgers, they’re blown away.” Even if they aren’t, Barraza still wants to hear what they have to say, “I’m the type of guy, I like criticism. I tell them, call me back, tell me how it was. If something’s not right, we’ll fix it.”

Urenda and Barraza both indicated that there have been changes to the menu and the hours to better fit with the neighborhood. Charlie’s now opens at 10am instead of 5am, and during the winter they only stay open until 8pm instead of 9 or 10pm. They’ve also added beer and wine to the menu along with more specialty burgers, like the (tasty) Green Chili Burger and the Chili Burger with chorizo sausage chili.  Aside from these routine adjustments, there haven’t been any big issues for Charlie’s in year one.

The only trouble so far was a Deal of the Day special that was more popular than expected. “We did five [coupons] a day for a while, then in the last three weeks we got slammed. We ran out of food early every day,” says Barraza, “We got fifty of them a day, it almost shut us down!”

As if doing well during their first year wasn’t enough, the management of Charlie’s has some ambitious plans for 2011. A remodel is planned for early in the year to make the space more comfortable and inviting.

“We want to make it cozier, not this cafeteria style of dining room,” says Barraza, “We want to close off the kitchen, build divisions [around tables] and do individual drop lights for the tables.” If their neighbor CommuniTea has success getting its (newly) required hard liquor license so it can keep serving kombucha tea, Charlie’s will try and get an extended liquor license too. Urenda and Barraza are also looking into opening a second Charlie’s location. “We figured that if this works here, it’ll work anywhere, “says Barraza, “We’re looking to expand to another location on a main strip, maybe Columbia City.”

Charlie’s will be celebrating it’s first anniversary on January 2nd with free cake for customers as long as it lasts. There will also be wine bottle giveaways to the 1st customer and assorted numbers after that.