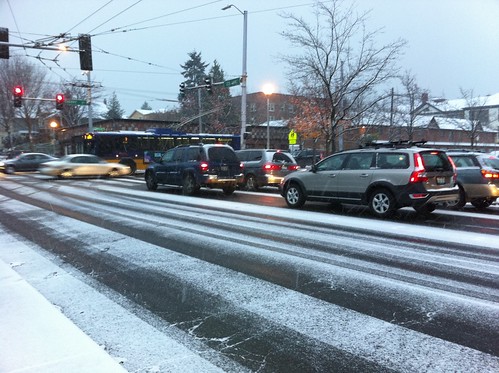 We were relieved this morning when we woke up and saw there was none of the predicted snow on the ground. Then we got on the computer, got cleaned up for work, and looked out the window to see heavy snow falling and already sticking to the ground.

So far there’s just a trace, but temperatures are down around 28F, well cold enough to see accumulations if it keeps on like this.

So far the buses are still running, although with chains and on snow routes to avoid steep slopes.

Our #3 bus was only a few minutes late, and the #48 was spotted heading north towards the UW.

Refer to http://www.kingcounty.gov to see if the snow routes will affect your trip. The #3 and #4 routes are skipping first hill and harborview stops, instead traveling south on Broadway from Jefferson, west on Jackson, and then north on 3rd Avenue.

Use this as your open snow thread as things develop throughout the day.