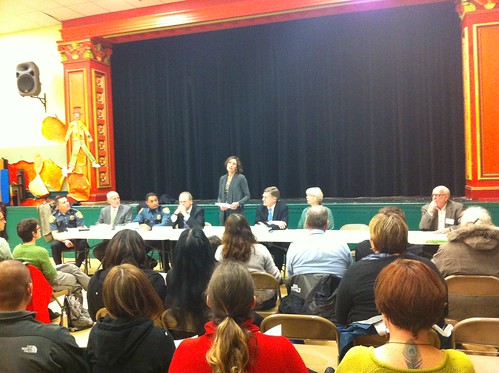 People treated by the planned Crisis Solutions Center at 16th Ave S and S Lane St will not be violent offenders or have histories of violence, said representatives from the city, county and the Downtown Emergency Services Center (DESC) at a community meeting Tuesday night. Most people being admitted to the service will arrive in restraints and will not be able to leave the center without supervision, according to the officials who spoke. The majority of the meeting was spent trying to assure residents that the new center will be a good neighbor and will not make the area more dangerous.

“These people are in your community tonight, except they are not getting any help,” said Dan Satterberg, Prosecuting Attorney for King County. Currently, there is no adequate solution for people with metal issues picked up on low-level misdemeanors or people in the midst of a mental crisis. People are often held for extended periods of time while the court and mental health systems try to determine if the person is competent to stand trial for a small misdemeanor charge. The process is very expensive and rarely produces a healthy result for the alleged misdemeanants.

A robust discussion about the center has taken place in CDN comments, here.

The Center is intended to be what Council member Sally Bagshaw called “The Third Way.” Instead of prison or the hospital, the center would be a chance to treat people. She said it would be “a much more humane and respectful place.” She also told an anecdote about a friend of her son who had a mental episode and was picked up and taken to jail. All he needed was some lithium, but instead he was picked up and taken to jail. She said Portland and Bellingham have similar centers that have proven effective.

Resident concerns were mostly about safety and what people saw as a tendency by the city to place services like these within their neighborhood instead of spreading the “burden,” as one resident put it, to other areas.

“I’m tired of the city dumping on this neighborhood, and I want to fight this,” said a long-time resident. People also asked several times, Why put this center in a residential area?

Bill Hobson, Director of the DESC and resident of the neighborhood, said the building is not in a residential zone, but rather it is zoned commercial. However, it is in an “edge” zone, meaning property on one side of it is residential while the other side is commercial. The Department of Planning and Development (DPD) determined that the Crisis Solutions Center is an appropriate use of the space.

However, Hobson’s answer did little to calm the anger of residents, who voiced frustration with Hobson and what they saw as a failure to keep the neighborhood informed about the project until it had already gone through. Hobson said the lease deal did not go through until mid-October, and that he had gone to the Jackson Place Community Council just days afterward to start neighborhood outreach

Council member Tim Burgess told residents they have two options. They can organize and work with the Center to ensure that their interests are protected at each step of the Center’s planning and operations, or they can fight the Center by either suing or trying to block the building permits. He urged them to work with the Center instead of saying, “Not in our neighborhood.”