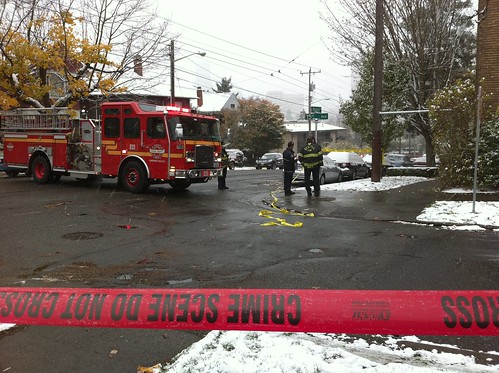 A man was killed with a pickaxe hatchet-like weapon near 14th and Union this morning, according to police at the scene. The first 911 calls came in around 10:37 a.m. The suspect fled after the attack. The victim was dead when police arrived.

Police got a suspect description from witnesses and were able to find someone and take him into custody. They also have the suspected murder weapon.

UPDATE: Police say it is unlikely the suspect knew the victim prior to the attack. The suspected weapon was originally described as a pickaxe, but is now described as something similar to a hatchet.

On November 22nd at 10:37 a.m., East Precinct officers responded to a report of an assault in progress in the area of 15th Avenue and East Union Street.  A man had attacked another man with an object that witnesses described as a pick axe.  The suspect then fled on foot.

Responding officers found the victim dead and began a search of the area.  Within minutes, officers located and arrested the suspect.  What officers believe to be the murder weapon was also recovered.

The suspect has been transported to Seattle Police Headquarters for questioning.  Crime Scene Investigation (CSI) detectives have responded to process the crime scene and search for evidence.  Homicide detectives will be interviewing witnesses and the suspect.

On a neighborhood note, the number 2 bus was stopped completely at 14th. It will be very delayed if it comes at all east of 15th. This stretch of Union will be closed for a while.