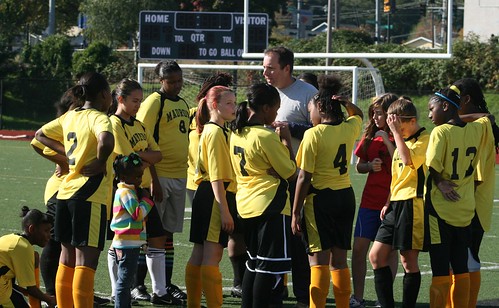 Two Madrona K-8 teams are in the playoffs this fall – one for the first time, and one as a perennial contender.

The girls soccer team, made up of 6th, 7th and 8th graders, has made the playoffs for the first time in school history, while the always dominating co-ed ultimate frisbee team will play for the division championship today at Ingraham High School.

The soccer team has a particularly compelling story. With only 150 students at the middle school at K-8, there are no tryouts and anyone who wants to play makes the team. According to coach Jon Hughes, the vast majority of the players have never played soccer before and many have never played team sports.

This year, its third season in existence, the team moved up from the JV division to varsity and made it to the middle school playoffs with a third place regular-season finish. The squad plays their final regular season game today against undefeated TOPS at 9:30am at Van Asselt. Then the first playoff game will likely be on Monday (11/8) at 3pm at Memorial Stadium. UPDATE: Madrona will play McClure on 4:30pm on Tuesday in the first round.

Who from Madrona will be at the games to support the kids?