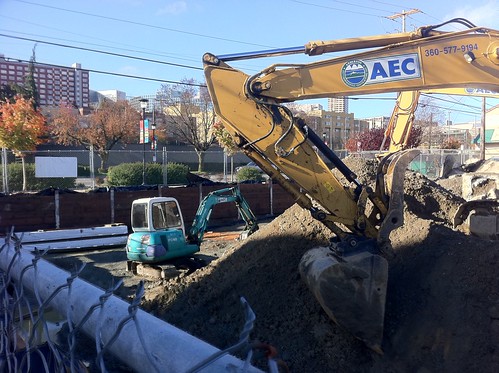 Construction work has picked up at the corner of 12th & Jefferson in the last week as crews work to remove tons of dirt that was contaminated by gasoline and other fuels back when a gas station occupied the now vacant property.

As we reported on earth day two years ago, the property is just one of many around the neighborhood where the state is tracking long-term pollution from automotive services and dry cleaners.

The clean-up in this case was organized by Capitol Hill Housing, which is seeking city approval to build a new six-story affordable apartment building on that corner. Capitol Hill Housing’s Cecelia Gunn tells us that the clean-up is being funded from government environmental funds and the corporate owners of the former gas station.

The Seattle City Council should be taking up the rezone request for the property within the next couple of months. Stay tuned as we learn more about the outcome of that process.