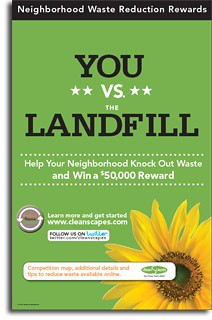 Madrona was one of the neighborhoods included in the $50,000 community project prize for reducing the most waste in 2009-2010 as part of CleanScapes’ city-wide competition. For those wondering if BOOM’s proposal is among the winning selections for a project, check back next week for the official project announcement.

In the meantime, residents can start reducing afresh. The 2nd Annual Neighborhood Waste Reduction Rewards competition is back for fall 2010-2011, with the same parameters: the neighborhood collection area with the greatest percentage decrease in total tons between now and fall 2011 wins.