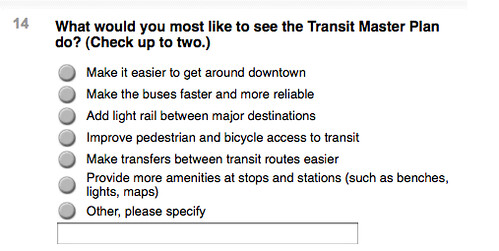 The Seattle Department of Transportation is asking for your opinion as the city updates its Transit Master Plan:

The Seattle Department of Transportation (SDOT) is updating Seattle’s Transit Master Plan, which will help to determine the city’s future investments in transit. As part of this process, SDOT is conducting a short survey to figure out what’s working and what isn’t in Seattle’s transit system. The survey takes less than 10 minutes and asks some basic questions about how you currently use transit and what you’d like to see improved.

What is the Transit Master Plan? Take it away, Seattle Transit Blog:

The transit master plan update will expand upon already identified important transit corridors and assign preferred modes to each. This will be the first time since the monorail that the city will officially take a position on what transit mode should be built in lieu of that project.

The other major purpose of the master plan is to improve existing service through small investments. The Transit Master Plan web page specifically mentions bus bulbs and signal priority as tools in the city’s purview.