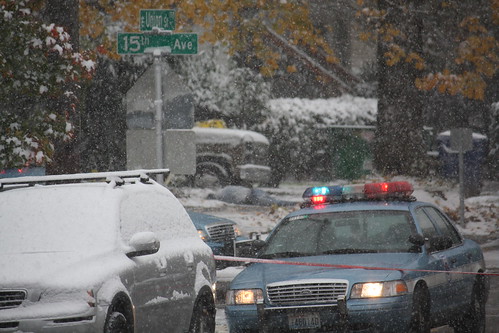 CapitolHillSeattle.com has details on the suspect police believe killed a man with an axe at 15th and Union  on Monday:

The 58-year-old victim’s name has not been released but a few in the CHS comments say they knew the 14th Ave resident as a “sweet peaceful old guy” with a dog he loved.

LaRosa has not yet been charged with the crime. He was booked into King County Jail Monday afternoon for investigation of homicide.

Just after 10:30 AM Monday, as a peculiarly heavy November snow fell on Seattle, several witnesses tell police they saw LaRosa strike a man in the head with an axe. The man died where he fell.