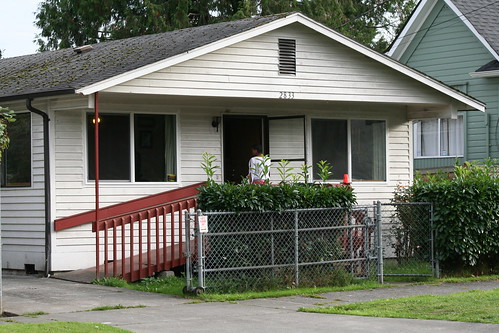 Seattle Crime has the more details on the drive-by shooting that damaged a Madison Valley home two weeks ago, including alleged ties to a previous drug-involved shooting in north Seattle earlier in September:

A man and a woman inside the home said they heard loud “booms” and the sound of glass breaking as they huddled inside with their infant child.

Following the drive-by, the mother of the man who lives in the home told police her son had been having trouble with a gang member nickamed BG Velle, who tried to steal a chain from her son the week earlier. Her son later told her “he was going to take care of the problem himself,” police records say.

Police records say BG Velle, 25, is a D-Dub (Down Wit the Crew) gang member who “hangs out downtown and sells drugs.”

SPD records indicate that last month, man apparently targeted in the drive-by was shot in the arm in anapparent drug deal at 105th and Aurora on September 16th. It’s unclear how the two cases are connected, but gang detectives are following up on both incidents.

On September 27th, detectives went looking for the car used in the drive-by, and spotted it leaving Roman’s Casino in Skyway.