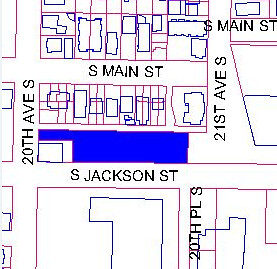 The long-vacant stretch of land along Jackson Street between 20th & 21st may be finally on track to see some development.

Next week the city will be hosting a design review for a proposed low-income housing development there. Details are scarce at this stage, but we do know that they’re looking at a 5 story building of apartments for seniors.

Last year we reported on a tip that the proposed building would include 55 studios and would include space for homeless and mentally ill residents.

The design review meeting is scheduled for next Wednesday October 20th at 6:30pm, at the Seattle U Alumni & Admissions building at 12th & Marion.