After years of proposals, campaigns, and numerous public meetings, today could be the day when the Seattle School Board makes a final decision on the fate of the old MLK Elementary school property. The board is scheduled to vote on the issue in a meeting tonight at district headquarters.

The board’s finance committee voted unanimously in September to accept the superintendent’s recommendation to sell the MLK building and property to First AME church for $2.4 million, turning down competing offers from [email protected] (a group of Madison Valley residents favoring a new community center), the Central Area Development Association, and The Bush School.

But two amendments have been offered by board members that could derail the plan to hand over the property to First AME. The first amendment, offered by Director Kay Smith-Blum (attached at left), would delay a decision until February of 2011, giving the board time to consider whether the property should be kept in public ownership to help alleviate overcrowding in other schools around the Central Area.

According to Smith-Blum, all but one school in the “central cluster” are at or near capacity, and a shortage of playfield space is driving Garfield sports programs to practice in far-away locations such as Marymoor Park in Redmond. Smith-Blum suggests that the district may need to hold on to the 4-acre MLK property and use it to provide playfield space for school programs, and allow revenue-positive rental of the space to private sports programs.

A letter sent to the board last night from Adrienne Bailey, a leader of the [email protected] organization (attached at left), urges the board to vote down Smith-Blum’s amendment, as the clock is ticking on the deteriorating buildings that the group hopes to turn into a community center. The Seattle Department of Planning & Development have set an end of year deadline for the sale of the school, and a February decision would exceed that deadline and result in the buildings having to be brought up to current building codes before being used, something that is financially infeasible for any of the parties that hope to make use of them.

But [email protected] is strongly in favor of a second amendment offered by Director Martin-Morris that would direct the district to accept [email protected]’s bid for the school. The short summary of the amendment (attached at left), states that the [email protected] proposal is $100,000 higher than First AME’s bid, and is “the only bid that truly keeps the property in the public domain.”

Bailey also launched a series of strong accusations against school staff and the First AME bid in her most recent letter to the board, calling the district staff recommendation “tainted, misleading, and incorrect”. Citing “ambiguities and tainted information”, she urges the board to allow full presentations from [email protected] and First AME in public hearings, giving each side an opportunity to prove the value of their proposals. 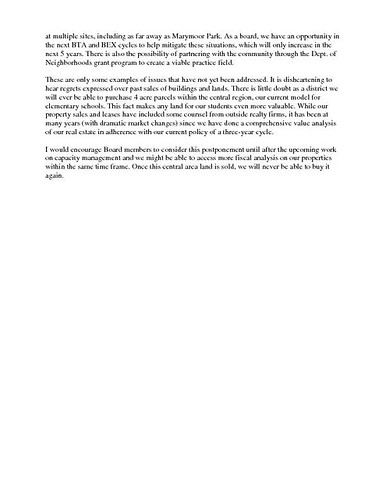 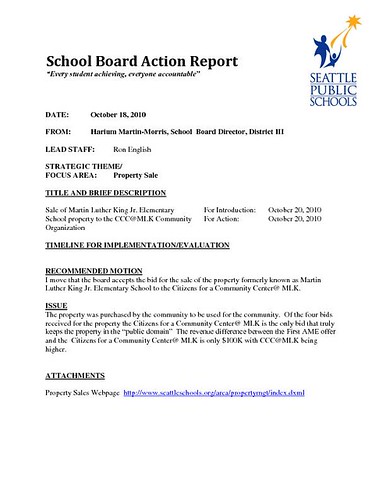 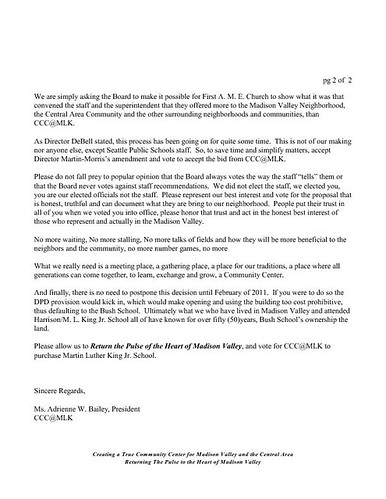