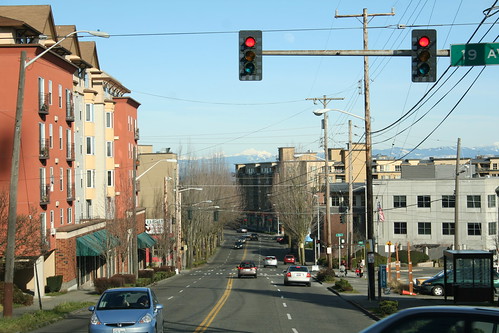 There was one surprise in the draft list of projects slated to receive funds from the Parks Levy. While we’ve talked a lot about the 12th & James Woonerf, the proposed park 19th & Madison was news to us and many of our readers in the Miller Park area.

A query to the Seattle Parks Department produced the 19th & Madison project application, which proposes for the city to buy the vacant lot on the southwest corner of the intersection and hold it for future development of a small park.

The corner was the historical home of a neighborhood fruit stand. When the brothers who ran the stand passed away in the previous decade, the property was bought by developers who started the permitting process for a mixed-use building on that site. But like so many others, that project died in the turmoil of the great recession.

Project plans call for a “tranquil green oasis” in that urban stretch of Madison Street. It would be fully accessible to all the neighbors near it, including the many residents of the nearby Hearing, Speech & Deafness Center (HSDC) and the Seattle Association for Jews with Disabilities.

The property is a small 5,000 square feet, but the project planners want to take advantage of the angled corner of the lot to create “interesting streetscape features” and make good use of the space available.

HSDC has secured a one-year option to buy the property for $450,000, and will transfer that option to the city if the project is funded. The remaining portion of the $473,000 project budget would pay for administrative costs and legal fees on the property transaction.

It’s important to note that the project is only funded for property acquisition and not park development. Organizers say they have an offer of pro-bono design services from a landscape architect to design the details of the park. But that would still leave a multi-hundred-thousand dollar bill to construct the park and make the project a reality. Funding for that is not identified in the project documents, but will likely require a future application through one of the city opportunity funds.