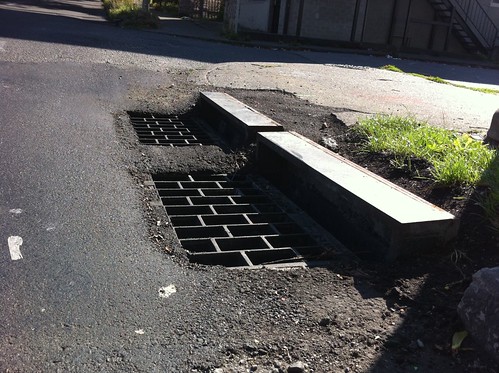 If you draw a line between 23rd & James and 22nd & Jefferson, you’d be tracing the path of what was once a significant stream that flowed south to the Rainier Valley, carrying run-off from as far north as Pike Street and up the hill west to 18th.

As development filled in around the spot, raised streets left that area as a small depression that is prone to collecting water during major rainfalls. Basements of houses there in the 500 block of 22nd saw major flooding back during the December 2006 rain storm, and their backyards have seen pooling water during smaller storms over the past few years.

The city noticed the issues and some residents complained, leading to a new project that is working to improve drainage in the area, allowing higher volumes of run-off to flow into the sewer system. Seattle Public Utility’s Ingrid Goodwin tells us that the specific design was driven by the observations of SPU staff during a storm in October of 2009, and they came up with a new drain design that is designed to cope with the large volume of leaves that fall in the area during the fall months.

The installation of the new drains is done, leaving only replacement of pavement and sidewalks before the project will be completely finished up. SDOT will be performing that work between 9/18 and 9/25, and will require closing one southbound lane on 23rd while the work is underway.