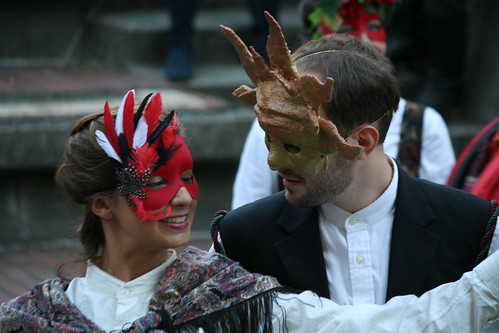 This weekend you can catch the third and fourth performances of Shakespeare’s Much Ado About Nothing for free at Blanche Lavizzo Park. The production by local theater group The Wrecking Crew begins at 7pm on Friday and Saturday nights, through August 28th.

We saw the show last Saturday night and had a really good time. The crew’s staging of the play often took them up into the stands of the amphitheater, provoking a lot of smiles among members of the crowd that they performed next to. And the acting and costumes are both good as well.

Performing in a public park has its challenges. The noise of British Airways flight 48 taking off can drown out even the best voice, and on Saturday night a large family was having a particularly festive party in the park behind the stage. But the actors dealt with the challenges with good humor and skill.

Notable performances included Jon Lee as Leonato, who has a voice and style that could carry over even the loudest sounds around him, and John-Paul Wilson, who’s role as Benedick brought a lot of laughs to the crowd.

We recommend bringing something soft to sit on, and it’s also a perfect spot to bring a picnic to enjoy during the show. Dogs are welcome too

The Lavizzo Park amphitheater is located behind the Odessa Brown clinic, just south of the intersection of 22nd & Yesler.

0 thoughts on “Much Ado About Nothing is free, fun, continues Fri, Sat”