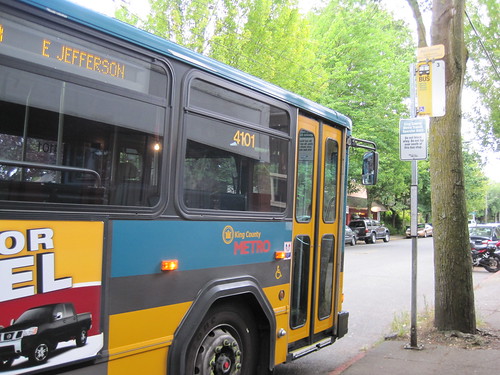 Updated: We’ve heard from a Madrona business owner that the No. 3 bus stop layover has been deemed too cost-prohibitive to move entirely, according to Metro.

An internal review by Metro’s Transit Route Facilities Group, an internal work group that oversees bus stops and other transit issues, concluded that it would cost $450,000 to move the layover from its current spot in front of St. Clouds restaurant.

For a bit of history on the bus layover move: two months ago, several Madrona business owners met with a representative from Metro about moving the layover spot further south, out of the central business district. A poll we ran showed a vast majority preferred moving the layover away from its current spot in front of St. Clouds.

Metro will send out an official letter this week announcing the decision and proposing ways to work with local businesses to improve the situation, such as reducing the amount of time multiple buses are waiting on 34th Ave.

What do you think of the decision?