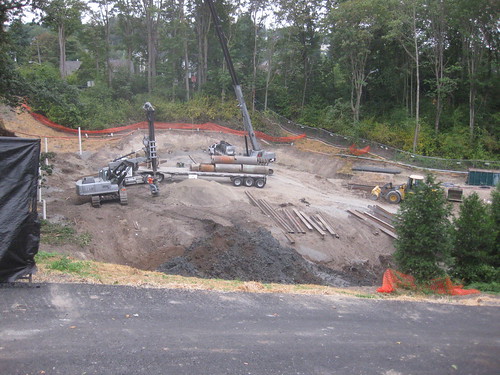 The second phase of the city’s efforts to fix Madison Valley flooding problems is underway, with construction crews working to excavate the 2.2 million gallon stormwater storage tank next to the playfields at Washington Park.

It’s a major construction site, with excavators removing a big chunk of the hillside and drilling down to create concrete supports for the tank’s walls. The project is the origin of the large dump trucks that have been moving through the neighborhood, mentioned by several commenters yesterday.

The tank is designed to collect excess stormwater during heavy rainfall, holding it until there’s room to process it through the sewage treatment system. It will supplement the 1.7 million gallons of storage in the stormwater detention pond at 30th & Denny, and is all being done in response to the December 2006 storm that killed Madison Valley resident Kate Fleming.

Crews are working fast to finish the major part of the excavation before the rainy season starts. 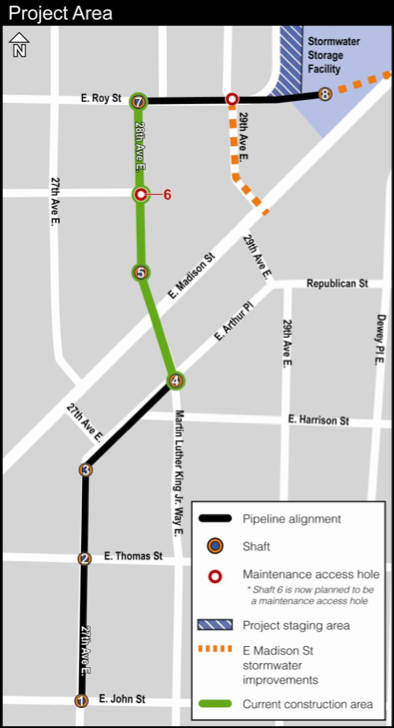 In the next few days city contractors will begin work on the pipeline that will carry the stormwater to the tank, using a tunneling method that will require large shafts to be drilled down in seven different locations between E. John Street and Washington Park. Work at three of those is expected to begin within the next week (shown in green on the map):

Expect traffic detours and loss of on-street parking once that work begins. It is expected to continue through mid-December, and the entire project is expected to be completed in the fall of 2011.