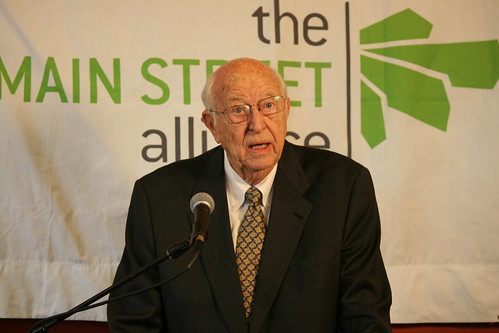 The tax-on-the-wealthy initiative that got its start at SOHO Coffee (a CDNews sponsor) looks to be headed to the ballot this November.

Today initiative organizers announced that they’ll be turning in 370,000 signatures to the Secretary of State before the deadline on Friday. That should be more than enough cushion over the requirement of 241,000 valid signatures that are needed before an initiative goes to the voters.

As we discussed in April, the measure will impose a statewide income tax on incomes above $200,000 for individuals and $400,000 for couples. Proceeds from the tax will go to fund education and healthcare, and will reduce state property taxes by 20% and eliminate the B&O tax on small businesses.

SOHO owner Barry Faught spoke in favor of the measure, saying that the removal of the B&O tax, which taxes a percentage of all business revenues regardless of profit or loss, will help many small businesses weather the rough economy.

0 thoughts on “Tax initiative that started in CD headed for Nov. ballot”