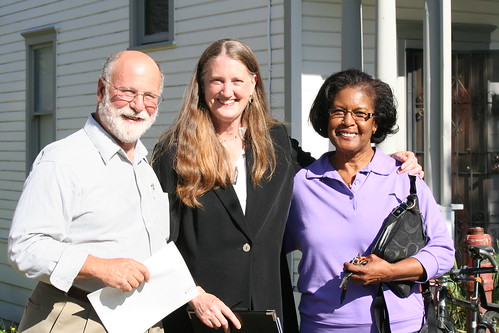 A few months ago there was nothing but bad feelings about the Black Dollar Days Taskforce’s plans to launch a re-entry program for recently released felons in the 100 block of 22nd. An earlier attempt by the city to negotiate an agreement between neighbors and the project’s backers went nowhere, with neighbors and members of the 22nd Avenue Blockwatch rejecting the city’s proposed Good Neighbor Agreement as one-sided.

But two months ago State Senator Adam Kline got involved as mediator between the two sides, got them talking, and today got their signatures on an agreement that will let the project go forward. Lottie Cross, COO of Black Dollar Days Task Force, said that “It wouldn’t have happened without [Kline]. He’s very good.”

22nd Avenue Block Watch leader Kris Fulsaas issued a statement today that called the residence “a worthy project” and said the agreement “provides a framework under which the housing project wil operate with optimal safety for its residents and its immediate neighbors, as well as with minimal disruption to neighborhood peace and quiet.” Fulsaas also credited Kline’s involvement as the key step that allowed the two parties to reach an agreement.

Lottie Cross tells CDNews that they’ve already got a long list of potential residents who are interested in the program. Three staff members are already active in the house, doing minor repairs and preparing it for its first residents who could start to arrive within the next several weeks.

Additionally, two blockwatch members have agreed to be part of the program steering committee, which will meet for the first time next month.